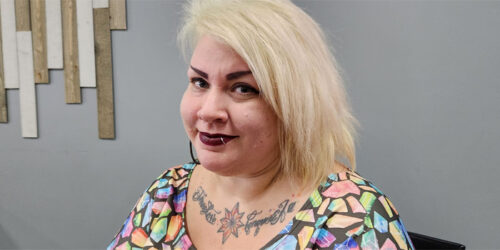 WARSAW — Not a lot of 38-year-old stay-at-home moms are the voice behind new albums, but Marena Moonflower is not your typical mom.

She is both shy and out there.

She often wears dresses. Her bleached white hair has a hint of pink. She has tattoos, and her lipstick is dark blood red and accented with a lip ring.

“I’m a quiet person usually in social situations, so I like getting on stage because it lets me express myself,” Moonflower said recently while sitting in a Warsaw coffee shop, Wire & Steam.

“I’m completely comfortable with letting loose on stage,” she said.

She’ll step out of her shell on Saturday, Oct. 1, when the culmination of a decade of writing and learning and singing comes together at Moonflower’s album release party south of Warsaw.

The release party is part of an artisan fair south of Warsaw at the old church at the corner of SR 15 and CR 550S.

The fair begins at 4 p.m. The release party starts in the early evening and is a ticketed event. The party will feature cuts from the album and live performances from Moonflower and two other performers. Costumes are encouraged. To learn more about the event, click here.

Moonflower grew up with music in Alabama. Her mother was in theater and was also a voice and piano teacher.

She was always interested in music, began playing the flute in the fifth grade and then immersed herself with other students in high school band.

Ultimately, her mother set aside musical ambitions and chose to concentrate on having a family.

Moonflower said that stuck with her.

“I don’t think I should have to choose,” she said. “This is my goal in life – to pursue my art and have a family at the same time.”

Her family moved to Indiana when she was young and she attended Wawasee High School. She later moved to Chicago and returned to Kosciusko County about a dozen years ago.

She soon found her musical groove and local connections in Warsaw.

House parties with musicians often turned into a chance to perform, and Moonflower was still occasionally jamming on a flute.

“All my friends were musicians. I was tired of being the chick with the flute so I taught myself how to play guitar and started writing my own stuff,” she said.

In recent years, she’s been performing locally and hosted open mic nights for a while at Rex’s Rendezvous in Warsaw.

“I was out there every Thursday for two years,-” she said. “I really enjoy the community that we have.”

Moonflower doesn’t exactly paint within the lines with her music either. She grew up listening to punk. She’s a big fan of the Dead Kennedys and one of her favorite albums is Weezer’s Blue Album.

On the other hand, she said she appreciates the music of country legend Patsy Cline.

“I do venture into the country realm sometimes. I’m very eclectic in my styling,” she said.

The album – titled Supernova – was a long time coming, she said.

“I thought it was going to happen and then COVID happened and everything kind of got shut down for a couple of years,” she said.

The album is a mix of styles. Some songs are stripped down to vocals and guitar while others are upbeat with punkish appeal.

There are 10 songs, including one that was written 10 years ago, she said.

She leaned heavily on Zach Moreno, a local musician who produced the music. He provided percussion, guitar and accordion.

“Zach deserves a lot of credit for it because much of it is his style,” she said. 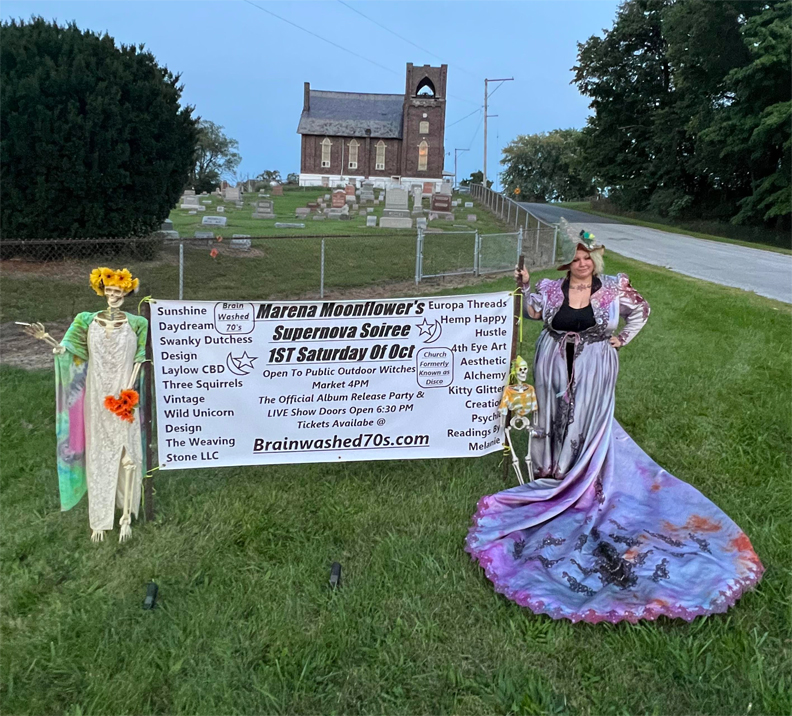 Above is a promotional photo for the event taken outside of the church along SR 15. Photo provided.