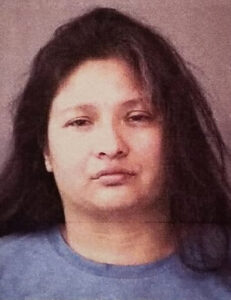 WARSAW — A Warsaw woman will serve 1 1/2 years in jail after battering a man with a metal bar.

Naomi Gonzales, 37, Warsaw, was charged with domestic battery with a deadly weapon, a level 5 felony; and resisting law enforcement, a class A misdemeanor. Two additional criminal charges were dismissed as part of a plea agreement.

Gonzales was sentenced in Kosciusko Superior Court One on Monday, Sept. 26.

For domestic battery with a deadly weapon, Kosciusko Superior Court One Judge Karin McGrath sentenced Gonzales to one year in the Kosciusko County Jail, and one year probation. Gonzales will also serve six months in KCJ and six months probation for resisting law enforcement. Both counts will be served consecutively, as well as consecutively to a misdemeanor disorderly conduct case.

In total, Gonzales will serve 1 1/2 years in jail and 1 1/2 years on probation. McGrath said she had no objection to Gonzales serving the executed time through work release or community corrections.

In February, the Warsaw Police Department responded to a fight in progress. A man said he and Gonzales were having an argument that became physical when Gonzales pushed, scratched, bit, punched, and kicked him. She also hit him multiple times in the back and head with a metal bar. While being taken into custody, Gonzales pulled away from officers while physically resisting.

At sentencing, Deputy Prosecuting Attorney Joseph Sobek said this case was “particularly sad.” He noted Gonzales had represented herself in prior cases and described her as a “quiet, pleasant, and sober” person who “rapidly accepted responsibility for her actions.”

“When she’s not sober, she’s a different person,” said Sobek.

“Rehabilitation is what matters most to me right now,” said Gonzales.

“I hope you put rehab at the top of your list,” said McGrath.

A no-contact order remains in effect between Gonzales and the victim.