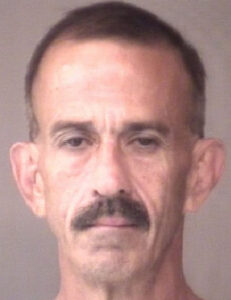 Bret Allen Bailey, 58, 5756 S. East Channel Road, Warsaw, is charged with two counts of theft, both level 6 felonies; theft and dealing marijuana, both class A misdemeanors; and possession of marijuana, a class B misdemeanor.

On July 11, a Warsaw Police officer responded to an auto theft at Best Deal Auto Sales. A man told the officer a white 2015 GMC Sierra was stolen from the business’s lot.

According to court documents, security footage showed a man removing a registration plate from a 2011 Acura RDX and placing it on the GMC Sierra before taking the vehicle from the lot.

On Aug. 29, a Kosciusko County Sheriff’s Office deputy responded to an auto theft at Creighton Brothers in Warsaw. A man said a 2009 red Ford F250, which was last seen on Aug. 25, had been stolen from the area.

On Sept. 2, a KCSO deputy responded to an unrelated call for service and was advised by a citizen about a marijuana grow, stolen vehicle, and other stolen items at a home in Warsaw. The deputy drove past the location and saw a white GMC Sierra that matched the description of the one stolen from Best Deal Auto Sales.

The KCSO deputy was assisted at the scene by the Claypool town marshal and an Indiana State Trooper. Officers confirmed the GMC Sierra was the stolen vehicle and spoke with Bailey, the property owner of the area where the vehicle was located.

Bailey told officers a friend had brought the vehicle to his property. While investigating the GMC Sierra, the KCSO deputy noticed a very strong smell of marijuana outside of the home.

The Claypool town marshal noticed a large number of marijuana plants growing in a garden area that were visible from the roadway. Officers also noticed a Ford F250 parked in a detached garage that matched the description of the one stolen from Creighton Brothers.

A search warrant was obtained for Bailey’s property. Officers confirmed the Ford F250 was the one stolen from Creighton Brothers. The ISP trooper collected 41 cultivated marijuana plants from the garden, which weighed 416.9 grams.

Bailey told the trooper he had planted marijuana seeds and grew marijuana plants. The trooper noticed that steps had been taken in an attempt to camouflage the marijuana plants by hanging a large net between two trees and using a folding divider.

Bailey has already been arrested and released on bond.