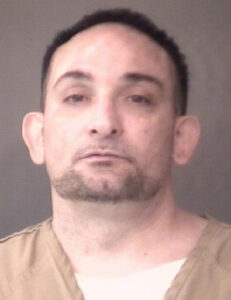 WARSAW — A Mishawaka man will serve five years in prison for illegally possessing a firearm used in a 2019 shooting in Warsaw.

Jason Olen Neiswender, 43, Mishawaka, was charged with carrying a handgun with a prior felony conviction, a level 5 felony. Seven additional charges, including a Level 3 aggravated battery charge, were all dismissed as part of a plea agreement.

Neiswender was sentenced in Kosciusko Superior Court One on Wednesday, Sept. 21.

On June 20, 2019, the Kosciusko County Sheriff’s Office and Warsaw Police Department responded to a battery report involving a firearm in Warsaw.

Officers arrived and found a male driver with multiple cuts on his head and face. A passenger in the vehicle appeared to have a gunshot wound to his chest and was taken to a hospital in critical condition.

According to an affidavit of probable cause, the driver said he and his passenger were leaving a residence when he was knocked unconscious by an individual. When the driver regained consciousness, he noticed his passenger had been shot.

The driver took officers to where the shooting occurred where they found a handgun along the roadway. Officers contacted the man who owned the handgun.

The man said he had sold the handgun to Neiswender.

During sentencing, Deputy Prosecuting Attorney Joseph Sobek said the case against Neiswender has ebbed and flowed with a long history of proceedings, as the case was set for jury trial on multiple different occasions. Sobek said the COVID-19 pandemic played a large role in the delay, with jury trials throughout Indiana being placed on hold in 2020.

Defense Attorney Jay Rigdon argued that Neiswender had initially been facing many charges that he was ready to contest.

“We strongly contest any connection to the aggravated battery charge,” said Rigdon.

Rigdon noted that Neiswender is currently facing a significant sentence from an Elkhart County drug possession case. He asked Kosciusko Superior Court One Judge Karin McGrath to consider placing Neiswender in Recovery While Incarcerated as part of his Indiana Department of Correction commitment.

“I don’t believe he is the worst of the worst,” said Rigdon. “He’s able to take responsibility for what he did and didn’t do.”

Neiswender apologized to the court and agreed that while he possessed the firearm used in the shooting, he didn’t shoot the man. He asked Judge McGrath to consider his drug history and asked for placement in RWI.

For carrying a handgun with a prior felony conviction, Judge McGrath sentenced Neiswender to five years in prison. She recommended Neiswender for participation in RWI.

Neiswender has 19 days of jail time credit in this case, and a no-contact order initially filed between Neiswender and the victim will remain in effect.