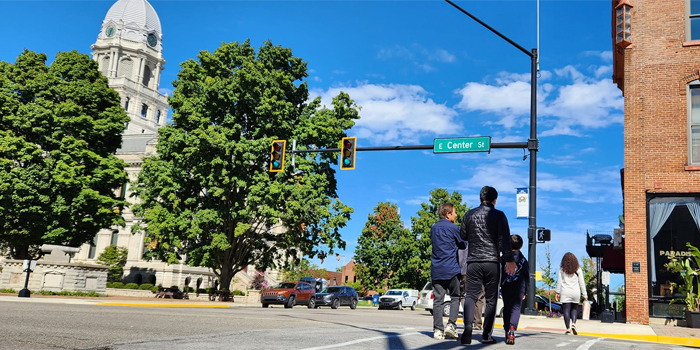 North Buffalo Street, south of Center Street, will be closed Saturday night, Sept. 24, for HomeBrewFest. A Latino block party will be to the west on the Kosciusko County Courthouse lawn. InkFreeNews photo by Dan Spalding.

WARSAW – Organizers of two outdoor events recently realized they have overlapping plans for the same night in downtown Warsaw and are now coordinating what looks like a big double header of fun on Saturday, Sept. 24.

At the same time, the Kosciusko Kettleheads Homebrew Club was planning their 11th annual HomeBrewFest on Saturday night as well.

Representatives eventually learned of the overlap and then began working to coordinate the effort, officials said.

HomeBrewFest normally happens along Buffalo Street on the east side of the Kosciusko County Courthouse.

The Latino block party had been set to happen in the city hall parking lot south of the courthouse but has been moved to the courthouse lawn so the two events are adjacent and not separated by Center Street.

Both events begin at 5 p.m. BrewFest runs until 9 p.m. while the block party is set to end at 8 p.m.

The beer fest is a ticketed event and will offer more than three dozen locally made beers and ciders.

The block party is a family event. Live entertainment, including Ballet Folklorico, Omotayo Rite of Passage and Collier’s School of Dance, will be part of the event. Free Mexican popsicles will be given to the first 150 visitors, and other food will be available for purchase.

Organizers said the meshing of two events could result in a substantial crowd, and nobody’s complaining.

“I love it,” Parker said. “It should be a great time of food and brews.”

Kettleheads President Jason Rich said visitors heading to the beer fest are encouraged to arrive with a full stomach, and that the block party could help in that regard.

Travis McConnell, president of One Warsaw, which is helping organize the block party, said he considered it a great development.