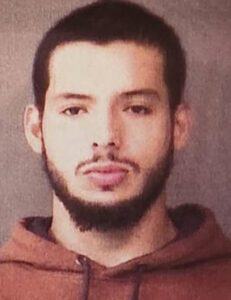 WARSAW — A Warsaw teenager was arrested after allegedly battering a Parkview Hospital officer and taking his Taser.

On July 26, a Warsaw Police officer went to Parkview Hospital regarding a report of an erratic patient.

Upon arrival at the scene, the Warsaw officer was informed that a Parkview Hospital officer was in a physical altercation with the patient, identified as Cortes. According to court documents, Cortes was actively attempting to resist the Parkview officer.

Additional officers arrived on scene and were able to forcibly place Cortes in handcuffs. Cortes continued to resist while hospital staff prepared arm and leg restraints on a patient bed.

Cortes was then restrained in the bed. A Warsaw officer attempted to speak with Cortes, who spit on the officer’s face.

The Parkview officer told Warsaw officers he heard yelling coming from Cortes’ room and went to investigate. He saw Cortes stripping out of his clothing while yelling at a woman.

Cortes allegedly charged at the officer while trying to leave the room. The officer eventually took Cortes to the ground and began attempting to gain control of him. During the struggle, Cortes retrieved the officer’s Taser, which the officer knocked away from Cortes.

The officer said Cortes also attempt to take his firearm from him twice. As a result of the altercation, the Parkview officer sustained a laceration to his left elbow, which required stitches.

At the time of this case, Cortes was on pretrial release in Kosciusko Superior Court Two for marijuana possession.