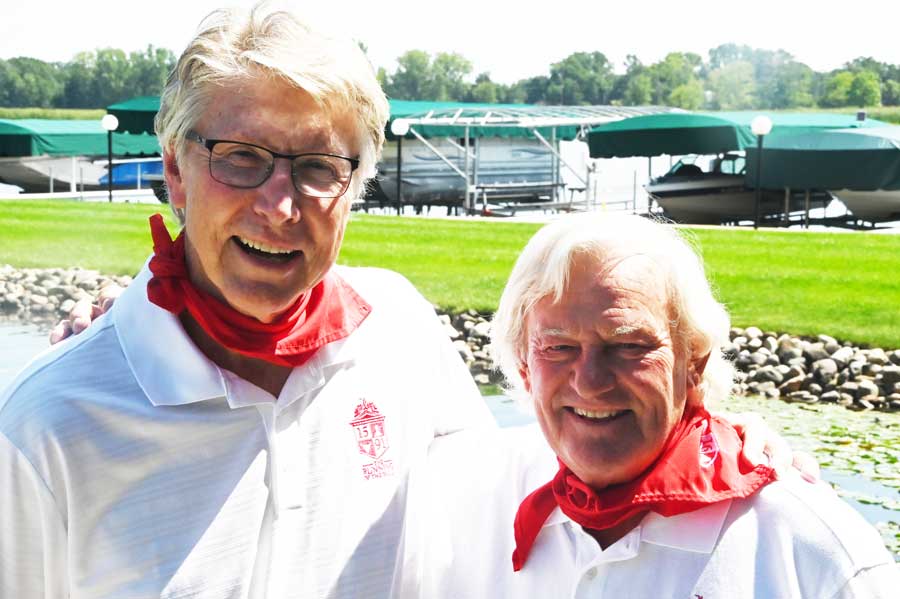 Tom Herald, left, and Gerard Gausselin pose in their original shirts and scarves worn while running with the bulls in Pamplona, Spain. Photo by Blair Baumgartner.

PAMPLONA — Gerard Gausselin and Tom Herald had a crazy idea. It was a bucket list item.

Both men worked hard their entire lives and finally hung it up when they were 70 years old. Now it was time to enjoy some experiences they put off over the years. They contacted their friend John Marshall in Naples, Fla., and all three men decided they were going to run with the bulls in Pamplona, Spain.

Sitting down on a sofa in Herald’s condo overlooking Lake Wawasee, the two men reminisced about their recent experience. They looked like they had just finished and were wearing the same clothing and red scarves they wore during their July run.

“They cancelled it the past two years. We found the dates of the festival and arrived a day after the festival started. We walked around and took a tour of where to go and what to do and were told we needed to stay away from the outside walls,” said Gausselin.

“Would I do it again? I don’t know. Probably not. We talked about it for years and then COVID happened. We decided if we were going to do it, we better do it,” said Herald.

“It was an eight-day festival. We picked the day after it started to take part in the running after being in Madrid. The centrifugal force of the animals makes the walls dangerous and you really need to stay away from the walls,” said Gausselin.

“The biggest thing I think — the scariest thing is the people. There were 1,500 to 2,000 people participating and you really had to be careful about being knocked down and trampled,” said Herald.

“We had to be there two to three hours before the start of the run. The police sift through the runners and make sure nobody is too intoxicated or under 18 years old,” said Gausselin.

After the police separate those runners who are unable to participate, all participants gather and wait for the thunderous sound of the bulls.

“Then you get started and say to yourself, ‘Feet don’t fail me now.’ You’re running for your life, quite frankly. I was running and was right in the middle. Tom and John were a little ahead of me. Two guys fell down right in front of me and I either had to jump over them, which I couldn’t do, or run around them and get close to the wall. I ran to the wall and hoped the bulls weren’t going that way. By the time I got there, the third bull was already by me,” he said.

“There are eight to 10 bulls per race. The streets were not very wide. The thing is you’re so close to the bulls. It’s over very quickly. It only lasts about 10 minutes,” said Herald. “It’s a 0.53-mile run. It’s quick,” said Gausselin.

“At dead man’s curve, the bulls can lose their footing. You don’t know what they’re going to do,” said Herald. “We were told not to position ourselves at dead man’s curve,” added Gausselin. “Those bulls are very fast and can get pretty nasty,” added Herald.

“I got knocked into a wall. You get hit and you start running again,” said Herald. “I was going to run two days in a row, but after doing it once, I said to myself, ‘Well, I’ve done it,’ and decided once was enough. I’m done,” said Gausselin.

“Afterward, John Marshall, Tom and I went to the plaza and were having beers and cigars. A young guy noticed we were speaking English and asked where we were from. We said the U.S. He said he was from Lucerne, Switzerland, and was part of their sports authority. He was there for the festival and the Hemingway Experience.

“We asked him if he was going to run and he said, ‘No, that’s way too dangerous.’ John Marshall said, ‘We did it!’ The young guy looked at us and said, ‘What year?’ We told him we just finished. He was in disbelief,” Gausselin said, laughing.

“We went to the arena afterward to watch the bulls fight to the death. No animal is spared,” said Herald.

“We were about two boxes down from the king’s and queen’s seats, but they were not there that day. The mayor of Pamplona and his wife were there. This was just steeped in tradition. The matadors are rock stars,” said Gausselin.

“Pamplona was wall-to-wall people 24/7 for eight days straight and then it just kind of went back to being a sleepy little village. It’s amazing how it transforms itself in that way,” said Herald.

Next up for Gausselin and Herald — skydiving. 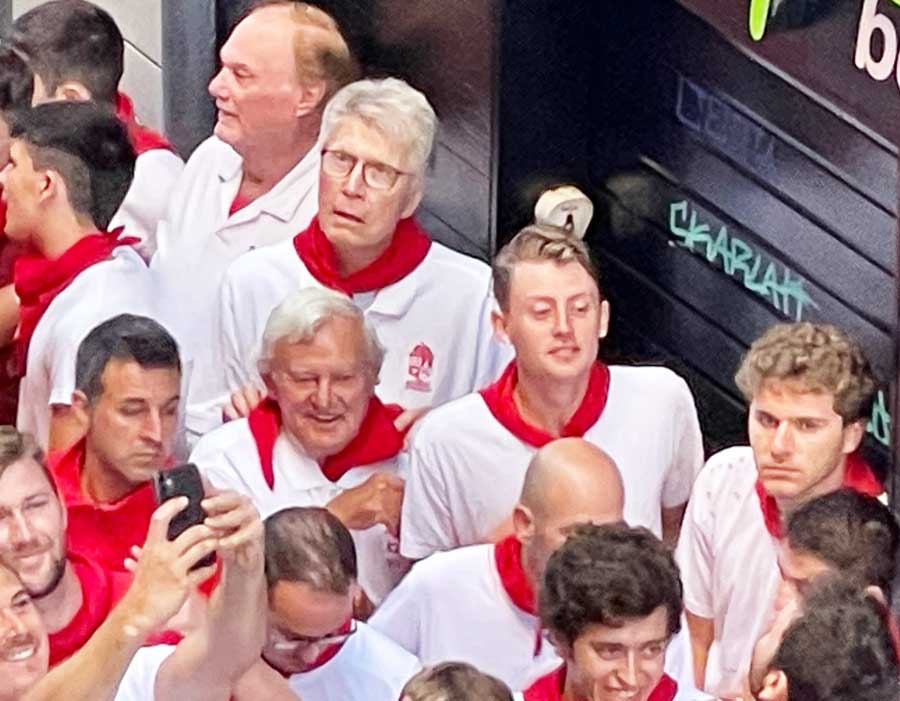 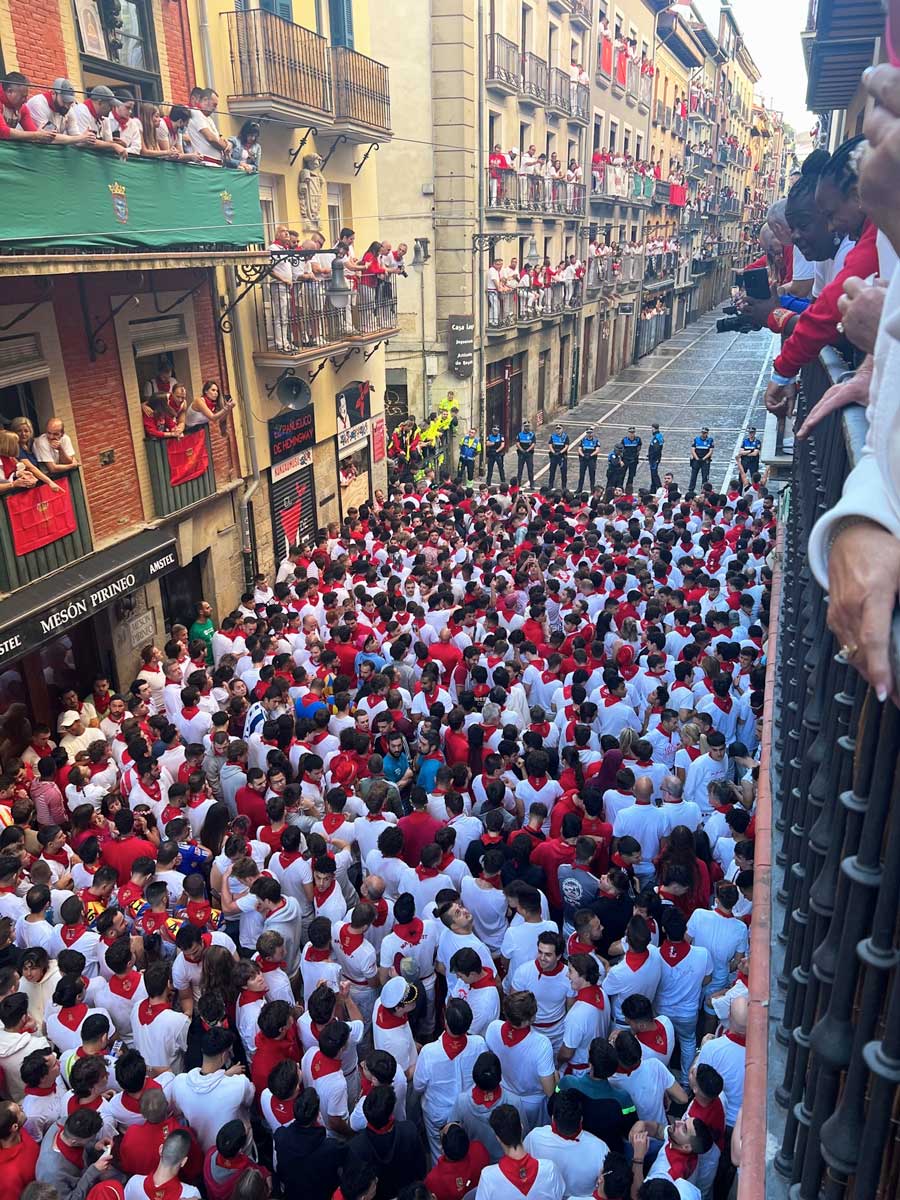 Runners wait in anticipation for the race to start. Photo provided by Cyndee Herald. 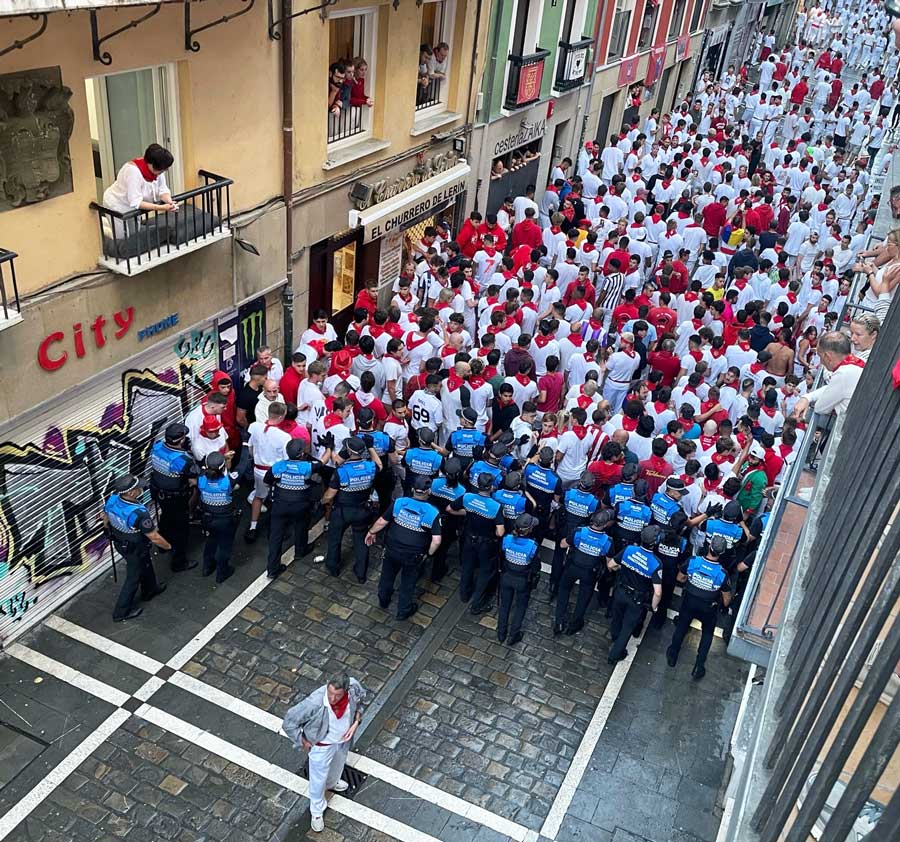 Runners are gathered together for the start of the race. Photo provided by Gerard Gausselin. 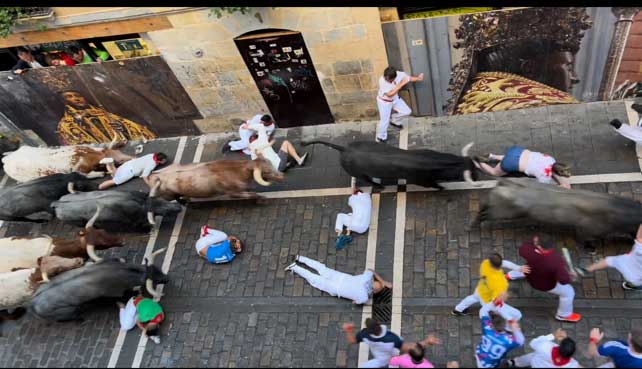 Bulls trample and gore runners while they are running for their lives. Photo provided by John Marshall. 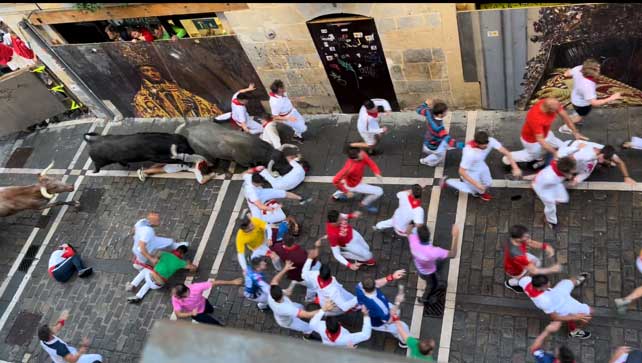