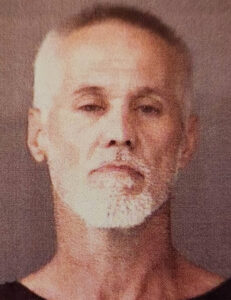 WARSAW — A Pierceton man was arrested after allegedly threatening a man while in possession of a firearm.

Terry Michael Hall, 53, 6756 E. Old Road 30, Pierceton, is charged with intimidation with a deadly weapon, a level 5 felony; battery resulting in moderate bodily injury, a level 6 felony; and possession of marijuana, a class B misdemeanor.

On Sept. 9, a Warsaw Police officer responded to a battery report. The officer was advised by dispatch that a man was battered by Hall and three other people. According to court documents, it was further reported that all of the assailants were in possession of guns. The group who battered the man had left the area prior to the officer’s arrival.

The officer then interviewed the man who was battered.

In the interview, the man said he was helping his girlfriend move out of a residence. When he went to pick up his girlfriend, he saw Hall outside of the home. The man  appeared to be on drugs and was in possession of a gun, he said.

At one point, Hall allegedly turned to the girlfriend and said he knew exactly where the man works, implying he knew where to find the man.

A short time later, Hall walked over to his vehicle and made a phone call. After a brief period of time, four other people showed up at the residence. The man told the officer that everyone in the group appeared to be on drugs.

One of the people in the group then jumped on the man’s back and punched him in the back of the head. Hall and two others in the group came over and started punching him in the head as well.

The man said a woman who was part of the group went to his girlfriend and threatened to kill her. He told the officer that he had lumps on the back of his head from being hit by Hall and two of the individuals. When the man’s girlfriend said she was going to call police, the group left the area.

Hall later told police that nothing happened. When asked if he had guns in his residence, Hall said he did but that the weapons were locked up and did not belong to him. Hall refused a search of his residence and property for officers to look for weapons.

After a search warrant was obtained, officers found about 20 guns, as well as drugs and syringes. Additional charges related to that investigation are pending.

At the time of this incident, Hall was on pretrial release for a criminal confinement and intimidation case through Kosciusko Superior Court One. In that case, Hall is subject to a no-contact order as a condition of bond which prohibits him from possessing firearms, deadly weapons or ammunition.

No official criminal charges have been filed against any of the other individuals who allegedly battered and threatened the man.

For this case, Hall was booked in the Kosciusko County Jail on Sept. 10.