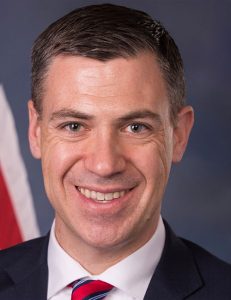 In a summary on the new bill, Banks referenced a recent statement from the Drug Enforcement Administration that “drug cartels are disguising fentanyl as candy ‘to drive addiction amongst kids and young adults.’”

Banks elaborated more on his motivation behind the legislation in a statement to InkFreeNews on Thursday, Sept. 22.

“The fentanyl epidemic … is now the leading cause of death for middle-aged Americans and warrants immediate, serious and bipartisan legislation from Congress,” he said. “Unfortunately, Speaker (of the House Nancy) Pelosi and House Democrats have ignored this public health crisis.”

“My bill would increase the penalties for drug dealers who target children. I also support legislation to stop the flow of fentanyl at its source by securing our border and legislation to enact stiffer penalties on all criminals who sell this poison in the U.S.,” he added.

Banks organized a roundtable on fentanyl last week at which congressional leaders heard from speakers who’ve been personally impacted by the drug. That included Brandi Shepherd of Warsaw, who founded Walking in Awareness and Recovery locally after her brother passed away from accidentally taking fentanyl last year.