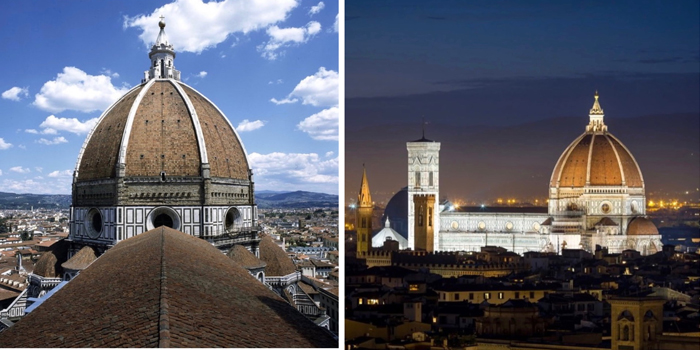 Pictured is the Cathedral of Santa Maria del Fiore in Florence, Italy.

By Darla McCammon and Darlene Romano

This week we will continue our study of the Renaissance.

We will reference the book that we reviewed two weeks ago, “…Isms: Understanding Art,” by Stephen Little. We learned last week that signs of artwork created during the Renaissance include the use of classical architecture and the use of classical subject matter such as gods and heroes of pagan mythology.

Another sign of artwork created during the Renaissance is the use of linear perspective. According to www.dictionary.com, the definition of linear perspective is “a type of perspective used by artists in which the relative size, shape, and position of objects are determined by drawn or imagined lines converging at a point on the horizon.” In simple terms, linear perspective is the point on the horizon in a work of art where everything meets. This allows an artist to create a painting or an object that looks three-dimensional, or the same as it looks in real life. The work of painters, sculptors, architects, and philosophers was all affected by this shift in thinking and technique.

The man solely responsible for introducing linear perspective to objects and paintings during the Renaissance was the architect Filippo Brunelleschi. He was one of the most sought-after architects during the Renaissance and he found a way to bridge the gap between math and art. Instead of creating art that was flat and disproportionate, his method resulted in art that represented reality.

Brunelleschi was born in Florence, Italy, in 1377, and died in 1446. He is most famous for creating the dome of the Cathedral of Santa Maria del Fiore (the duomo) in Florence. Solving “complex problems of engineering…was another facet of his wide-ranging abilities,” according to www.brittannica.com. For the duomo construction, he created machines specific to the project in order to see his design come to life. Many architects had attempted to create the nave, or dome, prior to Brunelleschi, but all had failed because they lacked the necessary craftsmanship to build the massive dome.

He came up with a way to create the enormous dome without using any supporting armor. In fact, the dome consists of one internal dome over two meters thick, “consisting of large arches held together by ribs and made of bricks arranged in a herringbone pattern; and an external covering, covered with terra cotta tiles and marked by eight ribs of white marble.” This project required the extensive use of linear perspective and math, combined with art, in order to be successful, and Brunelleschi was the only architect/engineer able to pull it off. Today the cathedral is the pride of every Florentine resident.

We now know that a Renaissance artwork will have three telltale signs to identify it:

Some of the other interesting architects who produced work during the Renaissance include Leon Battista Alberti and Donato Bramante. Take a look at some of their work and see if you can identify any indications of Renaissance art.