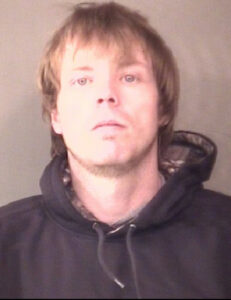 WARSAW — A Warsaw man will serve five years in prison after threatening a man and pointing a handgun at him.

Jeremy Joe Jones, 29, Warsaw, was found guilty in an Aug. 23 bench trial of possession of methamphetamine with enhancing circumstances and intimidation with a deadly weapon, both level 5 felonies; pointing a firearm, a level 6 felony; and driving while suspended prior, a class A misdemeanor. He was sentenced in Kosciusko Superior Court One on Monday, Sept. 19.

On April 16, 2020, an Indiana State Trooper went to the area of Rozella Road and SR 15 for a report of a man having a gun pointed at him. The trooper was told the suspect was possibly Jones, who was driving a white Chevrolet Malibu. According to court documents, the trooper searched the area and found Jones.

While taking Jones into custody, officers found a small bag containing a gram of methamphetamine and a loaded black and silver handgun in Jones’ vehicle. It was later determined that Jones also had a suspended driver’s license.

While at the jail, the trooper met with the man who reported having a gun pointed at him. The man said he and two women were traveling in a vehicle and were stopped at a stop sign when Jones pulled up behind his vehicle and honked multiple times. The man then exited his vehicle and upon doing so, Jones pointed a silver handgun at him in a threatening manner. According to court documents, the man said he knew it was Jones because they lived close to each other at the time.

During the Aug. 23 bench trial in Kosciusko Superior Court One, Jones was found not guilty of paraphernalia possession and stalking. The case was initially scheduled for jury trial, but was changed to a bench trial after Jones moved to waive his right to a jury trial. In the bench trial, Jones represented himself.

At the Sept. 19 sentencing, Deputy Prosecuting Attorney Joseph Sobek submitted two letters from victims as evidence to the court. He highlighted Jones’ criminal history and lack of remorse, requesting the court give Jones an elevated sentence.

Jones said he would not take responsibility for “something I didn’t do.” He told Kosciusko Superior Court One Judge Karin McGrath that his rights were violated, and that the victims in the case had lied about what occurred.

Judge McGrath said that Jones’ criminal history and the harm suffered to the victim were significant aggravators in the case.

For possession of methamphetamine, Judge McGrath sentenced Jones to three years in the Indiana Department of Correction. Two years will be executed and one year was suspended on probation. Jones also received a four-year DoC sentence for intimidation with a deadly weapon, with three years to be executed and one year suspended on probation. Both counts will run consecutively.

In total, Jones received an eight-year sentence, with five years executed and three years suspended on probation. He has 143 days of jail time credit in the case.

This case will also run consecutively to two additional cases. A no-contact order remains in effect between Jones and the victim.

An affidavit of probable cause on this matter has not been filed. Johnson acted as Jones’ purported Power of Attorney throughout the proceedings.