KCSO has received several phone calls regarding a phone scam from an individual posing as Captain Travis Marsh from the sheriff’s office.

According to a statement from KCSO, the caller is telling people they have warrants or have missed a court date and need to pay fees to avoid going to jail. The scammers have also used other information available over the Internet to try and convince victims that they are legitimate.

“We will never solicit payments over the telephone for anything,” read a statement from KCSO. “Those receiving calls from the impostor will quickly note that (the caller) cannot correctly pronounce ‘Kosciusko.'”

WPD has received reports of a lot of people in the area receiving text messages about packages unable to be delivered because the package’s address does not match the zip code.

“If you didn’t plan on receiving a package, there’s no reason to get a text like that,” read a WPD Facebook post. “If you use a package delivery service and signed up for text alerts, it will tell you who that service is.” 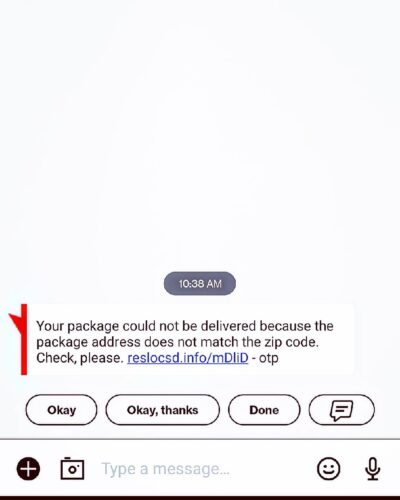 Pictured is a scam text message that many people locally are receiving. Screenshot from the Warsaw Police Department.