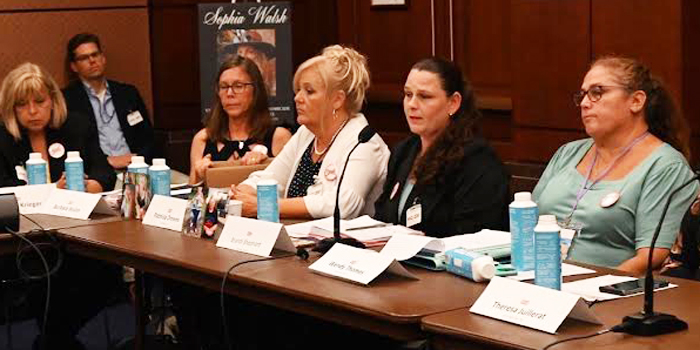 Brandi Shepherd, of Warsaw, second from the right in the photo, who founded the local organization Walking in Awareness and Recovery after her brother passed away from fentanyl, speaks at a congressional roundtable in Washington, D.C., regarding the drug on Thursday, Sept. 15. Congressman Jim Banks organized the roundtable and recently filed legislation aimed at preventing children and young adults from taking fentanyl. Photos provided.

Nearly a year exactly after his passing, she was able to testify before members of Congress why work needs to be done to prevent the synthetic opioid from “ravaging … countless families across the United States.”

Shepherd, of Warsaw, who founded the local group Walking in Awareness and Recovery, was one of nine people chosen to speak on Thursday, Sept. 15, at a fentanyl roundtable in Washington, D.C. Congressman Jim Banks, who represents Indiana’s Third Congressional District covering part of Kosciusko County, organized the roundtable.

He filed legislation that same day, H.R. 8839, the Protecting Kids from Candy-Flavored Drugs Act, aimed at “increasing penalties when a person manufactures, creates, distributes, dispenses, or possesses with intent to distribute a controlled substance listed in Schedule I or Schedule II that is combined with a beverage or candy product, marketed or packaged to appear similar to a beverage or candy product or modified by flavoring or coloring to appear similar to a candy or beverage product,” as listed in a summary on the legislation.

Those penalties would apply when “the perpetrator must have known or had reasonable cause to believe that the modified controlled substance would be distributed to a minor.” The increased penalties would be “up to 10 years for the first offense” and “up to 20 years for a second or subsequent offense,” with those added “to the penalty for the underlying offense.”

In a summary on the legislation, Banks specifically cited fentanyl as motivating it, mentioning a recent statement from the Drug Enforcement Administration that “drug cartels are disguising fentanyl as candy ‘to drive addiction amongst kids and young adults.'” He also referenced in the summary how “law enforcement seized 250,000 candy colored fentanyl pills from a single car” in Arizona near the border between the U.S. and Mexico.

Banks’ bill comes at a time when other Hoosier leaders are calling for action against fentanyl, with U.S. Sen. Mike Braun joining colleagues in filing the Felony Murder for Deadly Fentanyl Distribution Act, and state Attorney General Todd Rokita joining with AGs from other states in asking President Joe Biden to declare fentanyl a weapon of mass destruction.

Talking with InkFreeNews, Shepherd praised Banks’ legislation as “a great step in the right direction,” at helping keep fentanyl away from people.

“This is a fantastic start to be protecting our children,” she said.

Her brother was an adult when he passed away from fentanyl last year, but he didn’t know that the methamphetamine he chose to use was laced with the additional drug. Fentanyl being quietly added to other drugs is a growing problem in the U.S.

“(My brother) didn’t make a choice to die. He was poisoned,” Shepherd said in her testimony before the roundtable last week.

She also asked congressional members present to act on the issue.

“We need your help. We urge you to act now,” she said. “We need harsher punishment for the distribution of illicit fentanyl. Fentanyl is coming into our country in record numbers. We have to stand together and we have to take a stand now. Our youth are in jeopardy and their lives depend on us.”

Shepherd attended the roundtable along with several other members of WAR.

They also participated in a rally put on by the organization Lost Voices of Fentanyl on Saturday, Sept. 17. The group walked with “hundreds and hundreds of people” on the National Mall to the White House, said Shepherd, to protest the fentanyl problem.

She told InkFreeNews that getting to participate in events in D.C. was “bittersweet,” as they came after her brother’s death.

After her mother passed away from the effects of alcoholism in 2005, Shepherd said her brother was her only family left.

“It was just me and my brother against the world. That was my family,” she said.

Therefore, following his passing, she’s seeking to fight for other people’s families, she said.

Shepherd mentioned the widespread issue with fentanyl is one that cuts across people with different backgrounds, including not being just a “red” or “blue” problem.

“This is an all red, white and blue issue. This is an American issue,” she said.

Before she traveled to D.C., Shepherd met with Warsaw Mayor Joe Thallemer, who told her that in one weekend recently, the area had nine overdoses.

She asked Thallemer if there was any message she could take from him to leaders in D.C. 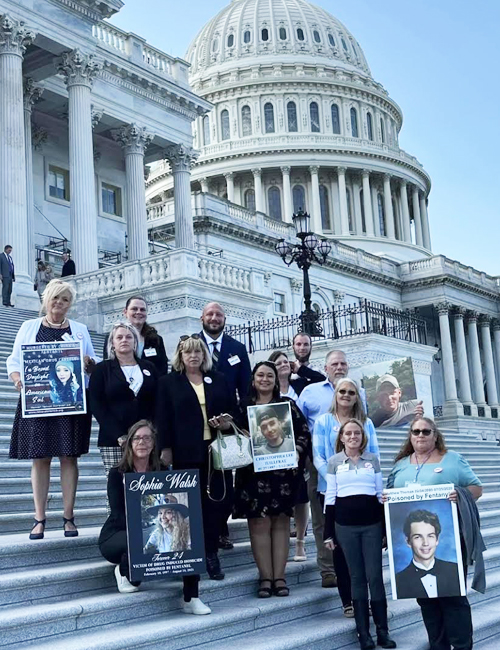