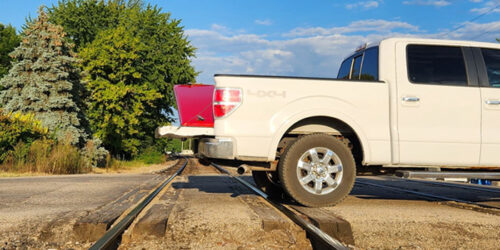 A truck with an item in its bed crosses slowly over the railroad tracks on South Bronson Street in Warsaw Tuesday morning, Sept. 20. InkFreeNews photo by Dan Spalding.

WARSAW — Some good news about railroad crossings and a request for lights on Patterson Road got the Warsaw Common Council feeling a little happy Monday night, Sept. 19.

They also had a public hearing on the 2023 appropriations and tax rates for the proposed budget.

Toward the end of Monday’s meeting, Mayor Joe Thallemer told the Council that the Indiana Department of Transportation (INDOT) was working on the Center Street railroad crossing for two days. Much of the work involves asphalt.

“They’re trying to … make it so that there’s not as much of a ramp effect when you go up over the crossing,” he said.

Thallemer said he also badgered another railroad company in town and there’s a “distinct possibility” that the Bronson Street crossing may get taken care of this year.

Thallemer said Bronson Street could potentially be taken care of as early as next week.

“That would be good,” Council President Jack Wilhite said.

Thallemer said he called a resident who kept complaining to him and he told the resident, “‘Don’t hold your breath, but they told me that they have a crew in the area.’ It wasn’t supposed to be done until next year. And we’re going to give them a hand with a road closure. And I was told that it would be next week – Wednesday, Thursday or Friday. Probably have to be closed for a day. Maybe even two.”

He said he wants to really see it get done with the roundabout construction going on in Winona Lake. He said he’ll believe it when he sees it though.

Also during the meeting, City Planner Justin Taylor presented the request for streetlights along Patterson Road (See map at bottom of the story).

Thallemer told the Council, “I had got several calls and several visits from neighbors out that way.” He said he asked Taylor to take a look at their request for lights along Patterson Road and it “appears that the city will respond favorably.”

Taylor said when Menards turns off their lights at night, it gets a little dark over there.

“A concerned citizen reached out and asked if there was anything we could do. We did take a look at that stretch and we found three poles where it made logical sense to place the lights. NIPSCO owns the poles so I will reach out to them with your approval,” Taylor stated.

At this point, he said they’re just requesting the three lights because the way they’re staggered, that will accomplish the goal. In the future, the city could look at additional lights if needed, Taylor said.

Councilwoman Diane Quance asked if they were all on one side of the street and Taylor said that was correct. He said there were some other lights along that stretch of road so they were just trying to fill in the gap.

Thallemer said there’s not really any sidewalks out there but a lot of folks walk and ride bikes back and forth between the neighborhoods.

“As Justin said, it’s a pretty busy road coming into the retail area there,” Thallemer said.

The approximate cost for each light is $30 per month, but Taylor said that was a worst-case scenario and with LED lights it could be closer to $24 per month per light.

“I think if it improves the safety and visibility, I believe it’s something that I would move to approve,” Councilwoman Cindy Dobbins said.

Wilhite seconded the motion and it passed 4-0.

Earlier in the meeting, the Council had a public hearing on the 2023 budget and approved, on first reading, an ordinance for the appropriations and tax rates.

Thallemer said, “Basically, this just lays out the budget, the tax levy and the adopted tax rate.”

Holding up a copy of the big binder of the city’s proposed 2023 budget, Thallemer said, “The budget is actually what’s in this book, everything we’ve gone through. The levy would then be based on that and 90% of our assessed valuation, which we know now the certified 100% would lower that rate.”

The Indiana Department of Local Government Finance requires that the budget be advertised using only 90% of the assessed valuation, he said.

“The other part, you don’t see in any of the miscellaneous revenue here, the income tax revenue, that’s kind of baked into the rate, but you’ll see a pretty big difference down between the budgeted amount and the amount we’re able to raise.  Again, a good portion of that is miscellaneous income – income tax and all of the other taxes that we avail ourselves to, as well as some of the cuts that you will be seeing tonight,” Thallemer continued.

With the assessed valuation, miscellaneous revenue coming in and with the budget cuts that were made Monday, he said the tax rate will come down to close what it was last year.

None of the four Council members present had any questions or comments. Councilmen Mike Klondaris, Jerry Frush and Josh Finch were absent from Monday’s meeting.

Thallemer then opened the meeting up to the public for comments, but none were made so the public hearing was closed.

Grose made a motion to approve the ordinance on first reading, it was seconded by Quance and approved 4-0.

Thallemer said, “We did enjoy a pretty significant increase in the assessed value, which is going to help keep that tax rate down. But I know we have work to do. We are over the levy and we’ve got work to do between now and when we finalize the budget.”

The first step to doing that, he said, is what used to be called “line 2 cuts” – reductions in spending for this year. The funds will go into the reserves for next year and can help fund the 2023 budget.

Thallemer said a good portion of those cuts are from health insurance, “but there’s some other significant cuts in the budget this year that these funds won’t be required to support.”

He said the spending reductions for 2022 is money the Council appropriated last year for this year’s budget and the department heads decided they will not need to spend that money this year.

“The impact of this is that it will be put into the reserves, which could potentially help fund a portion of the budget next year,” Thallemer said.

With no questions or comments from the Council, Quance made the motion to approve the resolution, Dobbins seconded it and the motion passed 4-0.

In one last other business, the Council reviewed the 2022 semi-annual sanitary sewer and stormwater utility financial management reports.

“I’ve had a chance to go through both of those and the conclusions are favorable,” Thallemer said. “… It appears that the rates and charges that we’re utilizing are sufficient to manage those funds.”

Red dots show where the city would like to install streetlights along Patterson Road. Map provided by the City of Warsaw.