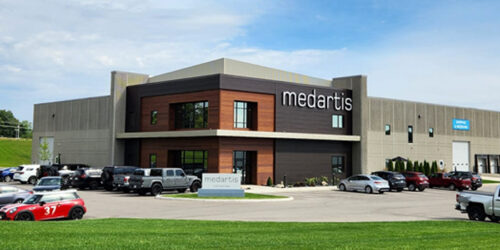 Medartis is located on Polk Drive inside Warsaw’s Technology Park along US 30. InkFreeNews photo by Dan Spalding.

WARSAW – Medartis, which acquired Nextremity Solutions of Warsaw earlier this year, recently reported a 20% sales growth as it makes further progress in strengthening its U.S. organization.

Medartis specializes in head and extremity surgery and is based in Basel, Switzerland.

In March, Medartis acquired Warsaw-based Nextremity Soliutions Inc. as it  announced plans to establish a market in the United States.

On Tuesday, the company reported first half-year net sales growth of 20.1%. Europe, the Middle East and Africa made the largest contribution to the growth with an increase of 21.4%. Sales in Latin America grew the most at 47.1%.

The company said the merger of two U.S. businesses and the transformation into a larger U.S. organization are proceeding according to plan.

Medartis CEO Christoph Brönnimann added: “Thanks to the hard work and ingenuity of our production and logistics teams, we have not yet been affected by major supply chain disruptions or delivery bottlenecks.

In May, the company concluded the acquisition of Nextremity Solutions.

“We lost some growth momentum during the leadership transition, but I expect U.S. sales to accelerate in H2. I am convinced that the talents and capabilities of our US sales and research teams will enable us to play an important role in the extremities market going forward,” Brönnimann said in a news release.

Medartis also announced it will be launching its first products from the Nextremity Solutions acquisition in the second half of the year.