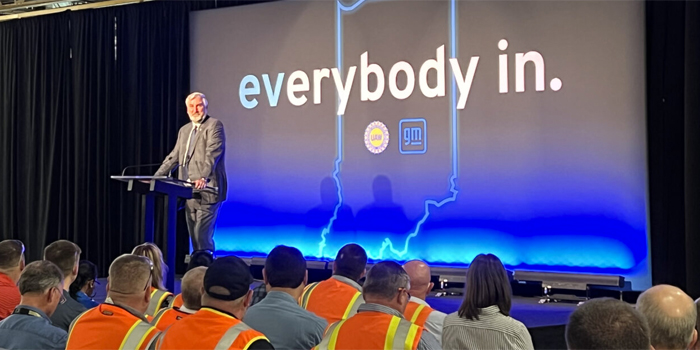 The automaker said it will purchase and install two new press lines, complete press and die upgrades and make renovations to the plant. A roughly 6,000-square-foot addition is also planned.

Work on the facility is slated to begin later this year, with expanded operations expected to start in late 2024.

“Technology is changing everything that we do, and our industry is no exception,” Gerald Johnson, GM’s executive vice president of global manufacturing, said Thursday at the Marion plant. “We are committed to this workforce and committed to the (electric vehicle) future that they can participate in. Marion has a strong history of stamping excellence and quality … they’re going to the future with us.”

Marion plant at the forefront of a nationwide automotive transition

The Marion center, which opened in 1956, produces sheet metal stamped parts and blanks that are sent for multiple GM assembly plants across North America to support production of Chevrolet, Buick, GMC and Cadillac vehicles. The plant employs more than 750 workers.

GM said its employment is expected to remain stable “with the addition of this new work in the plant.” Johnson noted that the company’s current “commitment” with the new investment is to the workforce “that’s here now.”

The Indiana Economic Development Corporation plans to offer GM with up to $12 million in conditional tax credits, as well as up to $500,000 in training grants, among other incentives, based on the company’s job retention and workforce development plans.

The state incentives package must be approved by the IEDC’s board of directors. The city of Marion will also consider additional incentives.

“We don’t take it for granted … we are so grateful that GM is going to be here for a long time to come,” said Marion mayor Jess Alumbaugh.

The project announcement comes amid GM’s push to ramp up its foothold in the electric vehicle market.

Johnson emphasized GM’s “very bold commitment” to phase out petroleum-powered cars and trucks in the United States by 2035. Instead, the company plans to sell only vehicles that have zero tailpipe emissions

“We won’t produce any more emissions-bearing vehicles, and that’s still our commitment,” he said. “That trajectory is 15 years or so out, but it’s fast paced, accelerated, and we’re engineering our way into that future.”

Indiana Gov. Eric Holcomb, who visited the Marion plant on Thursday, called the “jaw-dropping” investment a “wise” move by GM, saying Indiana is “all in” the greater automotive transition to electric vehicles.

State officials and private partners laid out their plan to create a statewide network of reliable electric vehicle chargers using federal funding in July. That plan has been criticized for being “inequitable,” however, and Indiana’s EV charging plan is not yet approved by the federal government.

Holcomb said “it’s incumbent upon our state” to actively participate in the electric vehicle transition, adding that part of that will require Indiana to make future investments to its infrastructure.

“This is about the future of mobility itself, and transportation,” Holcomb said. “We’re going to continue full steam ahead on building out our statewide charging network, and making sure that we’re trying to attract more battery manufacturing, trying to attract more semiconductor (companies). All these pieces snapped together … remind us that we are in the driver’s seat in terms of the future of mobility.”