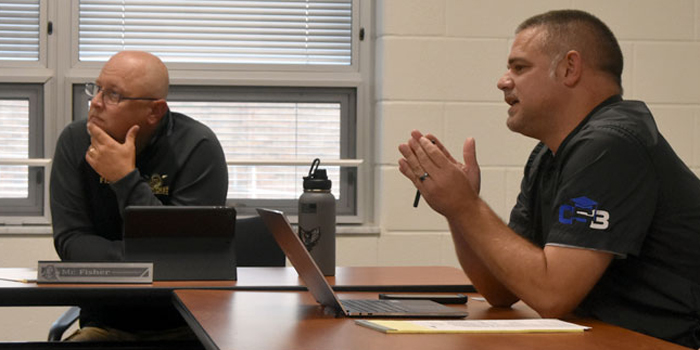 SYRACUSE — The future of Milford Middle School was among the many discussion points at the Wawasee Community School Board meeting Tuesday, Sept. 13.

Dr. Steve Troyer expressed that the board is still in the data collection phase of the decision-making process; they are taking statistical information, community input and contents of media coverage into consideration.

There will be a public meeting at 6:30 p.m. Tuesday, Oct. 25, in the Milford School Gymnasium in which the collected information will be presented and the community will have a chance to address the board. Troyer plans to have created an official recommendation by November or December.

The goal is to keep funds dispersed relatively the same as they are as stated in the 2022 budget, but he reiterated that the advertised levy amount is not expected to be fulfilled; the advertised rate stands high as it can only be dropped below that designation, never raised.

The total tax rate in 2022 was $0.5399, which was commended multiple times throughout the meeting. The school has one of the lowest tax rates in the area and the board assures that they intend to keep it that way, with the budget adoption set for Oct. 11.

The matter of issuing bonds for projects was touched on by Troyer. Further discussion on 2023 projects of maintenance type items will take place at the October meeting. Troyer stated they are “managing the tax rate to allow the project to continue without placing unreasonable expectations on taxpayers.”

There is now a safety tip line that is run through the Securly security system, serving to protect and monitor students while online. The system notifies the school administration, district and building staff immediately if there is cause for concern. Troyer stated that more often than not, they are notified for things that are not truly concerning, so he has full faith they will always be notified of any truly pressing issues.

During other business the board approved:

Recommendations of employment, transfers and resignations for support services and staff personnel.

Janice Rose was appointed to the Syracuse-Turkey Creek Township Public Library Board of Trustees.