Editor’s note: This is part of a series about local historical figures. The following is information from an 1873  article about Isaac Kirkendall, the first sheriff of Kosciusko County. The article is from the files of the Kosciusko County Historical Society.

WARSAW — The first sheriff of Kosciusko County was Isaac Kirkendall. 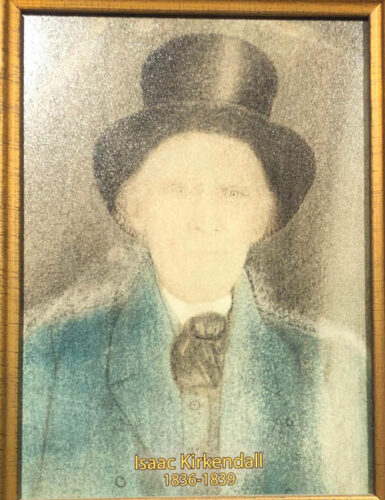 At the time of his election, he was about 49 years old, stood six feet tall, had lost most of his teeth, had one crooked eye and was entirely bald except a thin fringe of grey hair around the lower and back part of his head. His voice, when exerted, was a loud-sounding asthmatic treble.

His home was on a farm with his brother Jacob, on the east side of Little Turkey Creek Prairie, and he could often be seen passing through Leesburg on a large dapple grey horse on his way to Warsaw, the county seat.

In those early days, the courthouse was a two-story red frame building, which stood on the same spot where later stood a Baptist Church.

The first sheriff’s office and jail was a log cabin believed to have stood where the current Kosciusko County Courthouse sits today.

It was stated that the sheriff’s common talk was much blemished by an over-proportion of blasphemous words. This was one of his peculiarities; he seemed to lack words as forcible as his feelings, and to supply the defect, he drew on profanity.

This was apparent in the following excerpt of a speech Kirkendall made in Leesburg, prior to his first election:

“Gentlemen, I am a candidate for sheriff, and if you elect me, and any of you need hanging while I am in office, I will hang you dead as hell.”

He was elected, and although some of his voters may have deserved it, none of them were hanged during his term of office.

He was eminently social, and few men had so grateful and keen a relish for a drink of something warming. It was before the days of ale and lager beer, and drinking was exclusively done in spirits. Among all the varieties of these, the sheriff’s choice was whiskey straight, giving as his reason that he knew best how to gauge it. And in the matter of gauging the right quantity, he might be set down as a pattern more easy to admire than for others to imitate, as he was rarely ever seen under the visible effects of strong drink.

In politics, he was first an old-line Whig, and afterward a Republican, in which in the latter party he remained firm to the end of his life. He was a regular voter and zealous withal but never quarreled with men for difference of opinion. He was an efficient officer, a faithful friend and a kind-hearted neighbor.