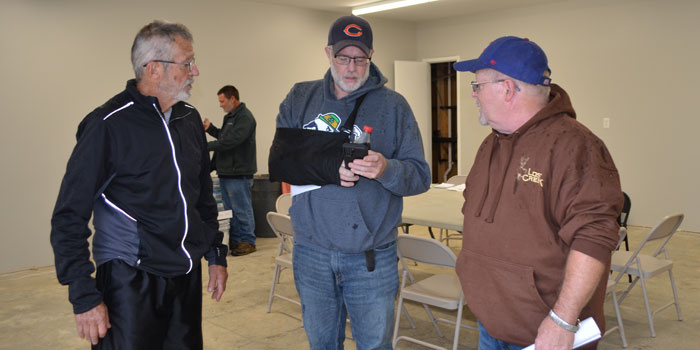 Syracuse Park Board members , from left, David Johnston, Jamie Beer and Paul Newcomer talk before Monday’s monthly meeting at a building at the new ball field in Syracuse. InkFreeNews photo by Phoebe Muthart.

SYRACUSE — The Syracuse Parks and Recreation Board met on a rainy Monday night, Sept. 12, at the new ball field in Syracuse. The board met in one of the buildings that has been completed. The board was going to tour the new ball field; however, the rain dampened those plans for the night.

Chad Jonsson, park superintendent, gave an update on Schrock Fields. Some fencing has been installed and seeding in the outfields has been done as well.

“We need to try to play ball next year,” he stressed, adding a well and a pump are being delivered soon.

“All of the fields are irrigated,” Jonsson said.

Nets will be put up, like at the high school. “We will have the funds in the spring. We will have time next year,” he added.

“There’s been a lot of work done in August,” Jonsson said. “There’s still a lot of little stuff that needs to be done.”

A final walk-through will be held once the project is completed.

Most of the buildings are finished, he said. Additional lights may be installed in the winter.

“What about parking?” asked Kip Schumm, park advisor, about parking spots in the lots. “We can look at that as we move forward,” Jonsson said.

Jonsson gave the tree board report. He said numerous trees will be removed in Syracuse and are indicated with pink ribbons. Also, trees will be planted around Syracuse with several potential spots targeted.

Jonsson said the mower for Schrock Fields has been ordered. The tractor is in, but he’s waiting on the deck. The board agreed to purchase a John Deere 1570 Terrain Cut with a rear discharge deck at last month’s meeting.

Lakeside Park’s playground mulch has been ordered for the spring.

Board members discussed the park reservation form for activities, such as at the Syracuse Community Center, Lakeside Park and other parks. A review of fees was discussed, including the refund cancellation fee.

Jonsson noted the park’s fees are lower than most facilities in the Lakeland area. The matter will be discussed at the October meeting.

He said a family campout at Lakeside Park went well with six families, or 30 people, attending. The Harvest Festival will be from 10 a.m. to 2 p.m. Saturday, Oct. 8, and includes live music with most activities free.

There will be no haunted house this year. Instead, a 5K fun run and 1K walk will be held. The high school’s cross country team will be helping. The event will be Saturday, Oct. 29.

The fall indoor garage sale will be from 9 a.m. to 2 p.m. Saturday, Oct. 15, at the Syracuse Community Center. So far, 30 booths are available.

A homecoming parade is Friday, Sept. 30 and will end at Wawasee High School.