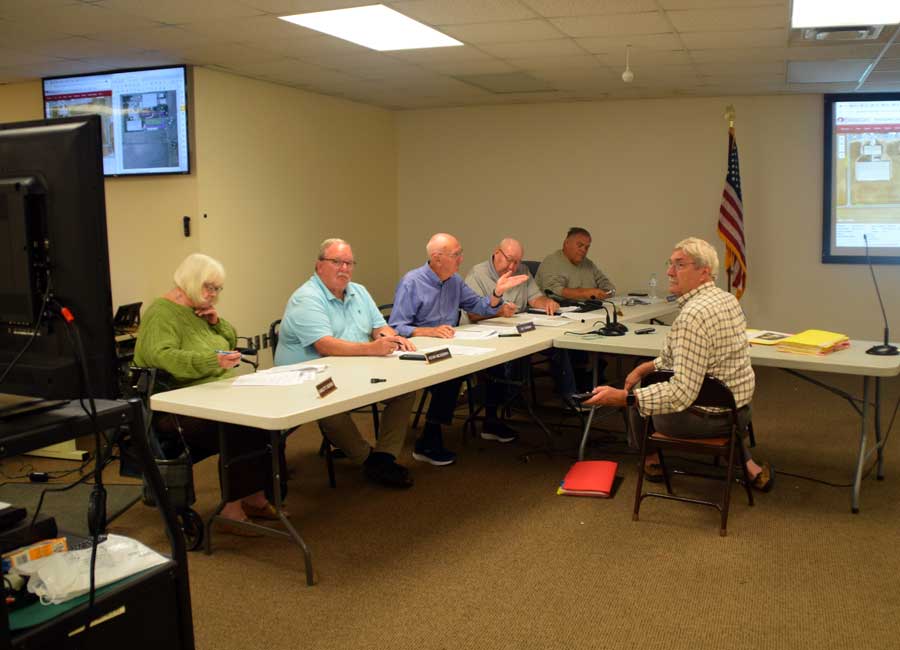 Members of the Kosciusko County Board of Zoning Appeals hear from a petitioner. On the left are, front to back, Charlotte Friedman, Kevin McSherry, Lee Harman, Randy Cox and Ron Robinson. On the right is Dan Richard, area plan commissioner.

WARSAW — After hearing from neighbors remonstrating about a proposed overflow parking lot in a residential area, the Kosciusko County Board of Zoning Appeals denied the request during its regular meeting Tuesday morning, Sept. 13.

Stacie Anderson came before the board with the petition to allow a parking lot for 50 vehicles and boat trailers in the Hoffman Lake Lakeview Addition. Anderson, and her husband, own the Hoffman Lake Campground, located nearby. Anderson told the board she was willing to put up arborvitae to screen the parking lot from neighbors as well as put up a chain link fence. The lot would have had one entrance/exit.

One neighbor provided written comments. Another stated visitors using area as a temporary parking lot have been seen cutting through neighbors yards, including jumping fences.

A remonstrator living across the street from the proposed parking lot told the board they were informed by the Andersons the area would be used as a temporary parking lot only. When the area is used for overflow parking the neighbors have had to deal with trash in their yard, people using their drive way to turn around and strangers trespassing. “By making this request, I feel this is a statement that the campground is more important than locals who live there year round,” one of the property owners told the board.

In discussing the matter, Lee Harman, president of the BZA, said he had concerns about how far the proposed lot is from the actual campground. Board member Kevin McSherry noted boat trailers would be in and out of the area often. Anderson noted it would be less than in the past since the public use of the campground’s boat ramp is no longer allowed.

The board voted 3-2 to deny with McSherry and Ron Robinson abstaining.

The board gave Jonathan Fussle and Sky Team Properties three months to get the needed inspections done on two buildings, 110 S. Main St. and 117 S. Main St., in Claypool by the fire inspector and Department of Homeland Security to make sure they are up to code for apartments.

Should Fussle and Sky Team Properties fail to get the inspections done within the allotted time frame, their petition will be withdrawn and the BZA will file suit against them.

Dan Richard, Area Plan Commissioner, explained the board had heard these two petitions a year or so previously and at the time requested the necessary inspections. Fussle is asking for a variance to allow a multi family units in a commercial district, He also requested a variance for  11 apartments on a tract with 13,967 square feet when the ordinance requires 28,000 square feet.

Sky Team had its one petition requesting a change and alteration of a non-conforming use by allowing three commercial uses and up to nine apartments in a commercial district. That request also came with a request for variance for mixed use on a tract that is 11,803.5 square feet where 30,500 square feet are required. Parking would be provided with six off site parking spaces and sharing 34 parking spaces with the adjacent property Fussle owns.

Clint Ness from Sky Team came before the board and said Sky Team was not ready to proceed with its project and cannot bring inspectors in when it has other projects already in progress. He noted the apartment building has had at least four owners. Richard said those owners had illegal apartments and the inspections still need to be done.

Ness then said the inspections the property Sky Team owned was prohibitive. Harman said his recollection was that Ness came before the board the first time and said he would get right on the matter and nothing was done. “I know, I have no credibility here,” Ness said.

Discussion continued with Ness saying he has not been able to set a date with the Department of Homeland Security. Richard countered saying the office always answers the phone when the employees from the plan commission office call and offered the phone number.

An adjacent property owner to the two properties being discussed expressed concern regarding the parking. Harman said it would be addressed when either the inspections were done or the lawsuit was filed.

The board approved the following requests:

• Allowed Justin Wegener, a variance to leave a 10 foot by 16 foot shed if he moved it 2 feet out of a drainage/utility easement.

• Approved allowing Peter Klaiber to have a home based business manufacturing and selling tiny homes.

• Allowing Yeni Rodriguez to install a 13 foot by 16 foot covered porch and erect a privacy fence that is 6 feet tall until it is 25 feet from the corner of her property where it will drop to 3 feet to allow a clear visual of the intersection.

• Approved a request by Steven and Laree Couwenhoven to put a second story on their home in Van Buren Township. The foundation can support a second story and neighbors approve as long as the foot print of the home is maintained.

• Approved a request by Kevin Mickem for a home occupation, food truck operations base in an agricultural district as long as the Mickems food trucks are moved to the back of the home so they are out of sight from the road. The Mickems were given until March 1, 2023 to come up with the funding to purchase gravel to move the food trucks.

• Approved a request by Leland Horrall to replace an accessory building 4 feet from the east sideline and 2 feet from the water’s edge.

• Approved a request by Richard Nowakowski to install a 3 foot by 6 foot covered entry and a 1 foot by 18 foot pergola.

The following petitions were continued:

• Ransbottom Family Farm. Richard said the planning office has received lots of remonstrances to the original plan. Petitioners are reworking the plan.

• Sailing Rendezvous requested a continuance regarding the construction of a new residence in Turkey Creek Township.

• John Stukenborg requested a continuance so he can discuss changes regarding his septic and well placement after learning county highway wants him to move his garage door on a property he’s restoring in Turkey Creek Township.