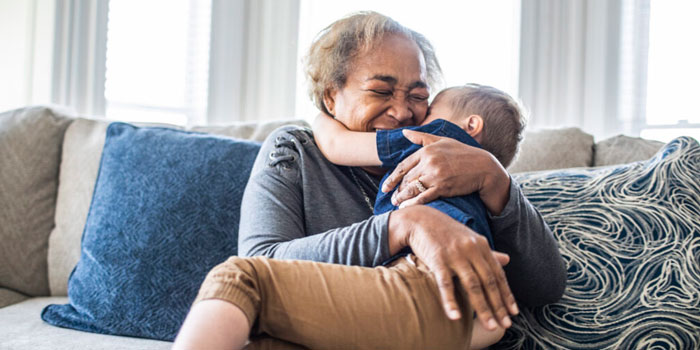 Kinship care is growing in Indiana but the financial assistance isn’t. Photo provided by Getty Images.

INDIANAPOLIS – A growing number of adult relatives are raising children who aren’t their own — often grandparents caring for a grandchild — in a family structure known as kinship care. Though it comes with many responsibilities and challenges, one looming obstacle is the financial burden on families providing for additional children.

An estimated 4% of all Hoosier children (59,000) live in some sort of kinship care, staying with their extended family members because their biological parents cannot care for them.

Caring for an additional child — or several children — can be a burden for families, especially for elderly grandparents. But few of those families qualify for financial support from the government, with just under 5,000 of those Hoosier families receiving foster care reimbursements.

“There are grandparents that maybe have a heart to help these kids, they just don’t have the resources or the money,” Rep. Dale DeVon, R-Granger, said. “They have to go through a licensing program to receive federal dollars and that licensing program could take two to eight months.”

But many families don’t want to go through the invasive process, which is designed to vet volunteer foster families’ competency and not to assess the safety of an aunt or grandparent’s home.

Compared to other states, Indiana has a higher proportion of its foster youth in kinship care than the national average — 31% versus 27%.

“Indiana is one of the leading states on (placing) children who can’t be with their parents with a relative… Hoosiers across the state have stepped up, oftentimes unexpectedly,” said Chris Daley, the executive director of the Indiana Association of Resources and Child Advocacy. “But how do we step up for Hoosier families in the same way that they stepped up for us?”

According to Purdue Extension Health and Human Sciences, parents and children in kinship care face numerous hurdles to care, such as addressing a child’s residual trauma and strained economic circumstances.

But being with their extended family strengthens a child’s connection to their social/emotional network, giving them more stability than traditional foster care. These situations also make it easier for the child to maintain a relationship with their biological parents, even though they are unable to care for them at the present time.

“There is definitely some research to say that children do better when they are being cared for by a family member. If nothing else, that connects them to (their) community,” Daley said. “(Other) research (shows) that children have better outcomes when their family is involved — either as providers or in some other way in their care.”

But unlike the volunteer foster families deeply entrenched in government programs who have case managers to help them navigate financial and emotional support, kinship families are often at a loss for how to access programs like Temporary Assistance for Needy Families, the Supplemental Nutrition Assistance Program and Women, Infant and Children program.

Additionally, even as foster parents decry the low reimbursement rate from the state, many kinship families don’t qualify for those payments because they don’t go through the licensing process with the Department of Child Services.

Licensed foster families receive daily payments from DCS designed to cover food, clothing, housing, travel and more, with the per diem starting at $18.88 per day. In a “Financial Assistance Options for Relative Caregivers” brochure on DCS’ website, licensed and unlicensed families may also get additional funding for special occasions or extracurricular activities, birthday gift money and more

For those families who do not license, including kinship families, DCS warns it cannot make daily payments. However, the agency can cover travel expenses for schooling, health visits and court proceedings as well as funding for five days of respite care, $90 weekly for child care and up to $4,000 for bedding.

“It’s frustrating for parents or grandparents that want to help their grandchild but they don’t have the financial resources to be able to do it all of the time,” DeVon said.

Licensing process difficult for many

But some families may not want to participate in the Safe Home Study licensing process that the state uses. Some lawmakers say that vaccine requirements for children living in foster families bar otherwise eligible families, and advocates call it an “incredibly invasive process.”

“When you’re a kinship parent and the state has come to you and asked you to take a child into your home, a child’s going to be there regardless of whether or not you do this very intensive study,” Daley said. “It can be very difficult for folks to see the value in that process and to feel respected in that process.”

Daley said that not all of the process applied to kinship families, unlike safety evaluations. Specifically parts about emotional well-being and parenting competency designed to identify foster parents who will be able to set emotional boundaries with a child in a temporary placement or applicants who will support reunification do not apply.

“Those questions are much less relevant for a kinship family where the child is already in the home and, regardless of whether the study is done, (the child) is going to stay in that home,” Daley said. “That just becomes this enormous barrier, and as a state we just haven’t really grappled with that piece quite yet.”

DCS didn’t respond to questions about their licensing process for kinship care families.

Where to go from here?

With the state’s $6.1 billion in surplus accounts, leaders remain divided on whether to spend, save or invest. Even Republican lawmakers have wondered aloud whether money could be better spent on social services such as foster care.

While both the federal and state government have placed a priority on keeping children with their families, the money hasn’t followed.

Both Daley and DeVon thought they’d found a potential solution for kinship care placements: securing a new source of federal funding to be identified by former Congresswoman Jackie Walorski.

But DeVon said Walorski’s unexpected death in August meant that child welfare advocates “kind of got the rug pulled out from underneath us.”

“We’re still trying to at least find out more where the ball was left, because I know it was kind of in their court,” DeVon said.

DeVon said he’s discussed the issue with Walorski’s presumed successor in the heavily Republican Second Congressional District, Rudy Yakym. Yakym won the Republican nomination in a caucus last month to appear on the ballot for the November general election.

Regardless of the winner, DeVon said he thinks help will come.

“There’s enough caring people, I think on both sides of the party (divide), that really want to see this thing through,” DeVon said. “I think we’re all trying to do the right things to help these kids; it’s not a political thing.”

“I think everyone agrees that we should be helping these families. It’s just what’s the best way to help them,” Daley said.