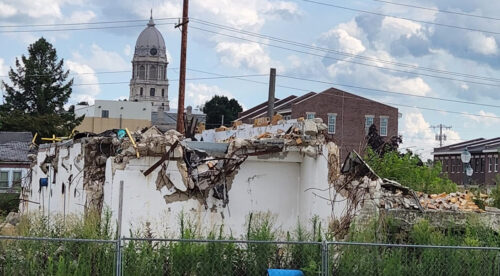 Pictured above is a view of leftover debris from the old Indiana American Water building that a developer had been demolishing. The city of Warsaw stepped in after months of waiting. This photo was taken on Aug. 1. InkFreeNews photo by Dan Spalding. 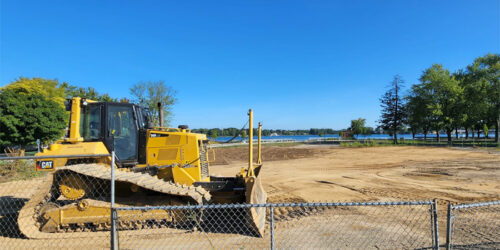 A view of the old Indiana American Water site in Warsaw on Saturday, Aug. 27. The city of Warsaw hired G&G Hauling & Excavating to clean up the site after a developer stopped midway through demolition. InkFreeNews photo by Dan Spalding.

WARSAW – The city of Warsaw has moved quickly to clean up the old Indiana American Water plant site after a developer quit making progress on the demolition effort.

By Friday, Aug. 26, the site was fully cleared and leveled by G&G Hauling & Excavating, which the city hired recently to clean up the site.

The city announced earlier this month that it was done waiting for Matthews LLC to finish the demolition project after it sat idle on the work where a multi-use building overlooking Center Lake had been proposed.

City representatives are working to restructure their deal with Matthews that removes the developer from the multi-use project but continues on the long-range adjacent residential development along North Buffalo Street.

Mayor Joe Thallemer provided an update during a meeting of the downtown merchants at HopLore Brewing on West Market Street on Thursday, Aug. 25.

Thallemer said the city is in the process of finding another developer interested in constructing a mixed-use building with retail on the first floor.

That project is a key part of the Buffalo Street development project that includes a lakeside plaza and residential development.

He said the building could be three or four levels tall and could include an event space on the roof.

He said plans to construct a multi-use building at the site of the old Owens Supermarket on West Market Street have slowed because of inflationary costs.

Thallemer said officials are “rescoping” the project and that it will take longer than expected to develop.

Regardless, Thallmer said the project remains a top priority and could have a transformational impact on the downtown area.

Thallemer also said the city has received plenty of input on the temporary bike lane installed recently along a few blocks of West Market Street.

The lane will remain in place for a few more weeks.

The bike lane will tie in with trails connecting Winona Lake to the east and the City-County Athletic Complex to the west.

There is no timeline for the project, but Thallemer said he expects refinements to the plan will be considered and that public safety remains an important aspect.