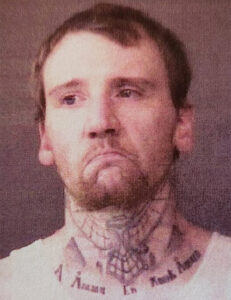 WARSAW — A man was arrested after allegedly battering two people and breaking into a home.

Jeffrey Alan Nicolay II, 33, Speedway, is charged with burglary, a level 4 felony; intimidation with a deadly weapon, a level 5 felony; residential entry, a level 6 felony; domestic battery and interference with the reporting of a crime, both class A misdemeanors; and battery and criminal mischief, both class B misdemeanors.

On July 18, a Kosciusko County Sheriff’s Office deputy responded to a domestic complaint at a Warsaw residence. Upon arrival at the scene, the deputy spoke with a woman who said she had been in a physical altercation with Nicolay.

According to court documents, the woman said the altercation was initially verbal but turned physical when Nicolay grabbed and pushed her. When she attempted to call 911 for help, Nicolay allegedly took the woman’s cellphone away from her.

She then attempted to leave the residence to get help when Nicolay wrapped his arms around her in an attempt to prevent her from leaving. The woman was able to fight Nicolay off and left the residence, going to a neighbor’s home for help.

The deputy then spoke with the woman’s neighbor about the incident. The neighbor said he attempted to help defuse the altercation when Nicolay became agitated. While he was holding pliers and a wrench, Nicolay threatened to harm the neighbor. Nicolay also pushed and hit the neighbor.

When the neighbor shut the door to his residence with Nicolay outside, Nicolay began to punch and hit the door with the tools.

Nicolay was able to force his way into the home and the neighbor grabbed a bat, backing Nicolay out of the residence. Nicolay then grabbed the neighbor by the arms and pushed him a second time.

The deputy noticed scratches and dents to the neighbor’s front door and damage to his siding. The door also had dried blood on the damaged area.

A witness near the scene said he heard Nicolay tell the neighbor he was going to harm him while holding a wrench. The witness also saw Nicolay force his way into the neighbor’s home.

Nicolay told the deputy about the argument and that it was his fault, but did not provide any further information. The deputy noticed abrasions and blood on Nicolay’s right hand.

Nicolay has already been arrested and released on his own recognizance.