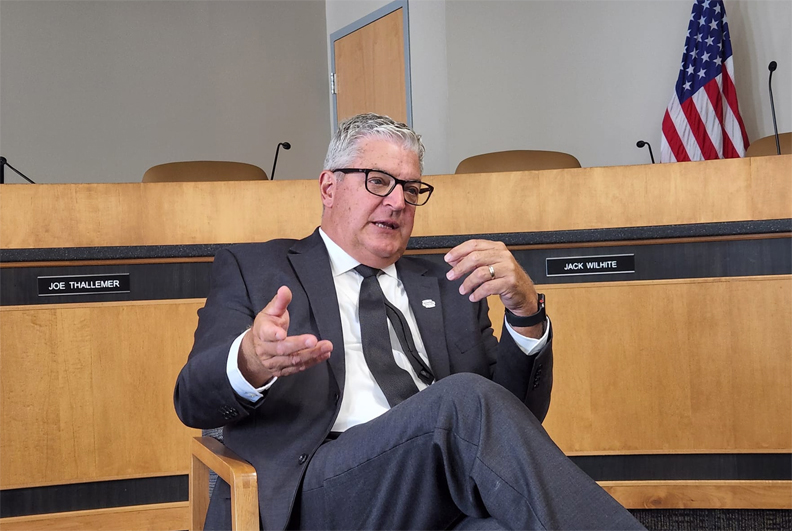 Warsaw Mayor Joe Thallemer talks with the media Thursday about the proposed limited access freeway that could somebody replace the existing US 30. InkFreeNews photo by Dan Spalding.

WARSAW – The idea of a limited access freeway replacing the heavily traveled US 30 across Indiana has been discussed for nearly a decade and it will likely be another two decades before it all comes together.

But the long-term proposal has reached the point where a few property owners along the highway in Warsaw whose land would eventually be directly affected are starting to clamor for details.

Mayor Joe Thallemer said Thursday that a handful of people have contacted him with questions and concerns that decisions have already been made.

Thallemer, who serves as president of the seven-county coalition, stressed that no decisions have been reached and that public input will be sought as the state begins the first environmental study needed to help determine the best path.

The environmental study is expected to continue for 18-24 months.

Officials have been looking at three paths for the highway – the current route or around Warsaw by either a north or south route.

Community reaction at past public meetings made it clear that there is very little support for a southern route.

Thallemer said it’s safe to say the community prefers to stay on the existing corridor. “But how that looks now becomes the focus.”

INDOT has not officially approved of the entire plan, but lawmakers have solidified support for the project.

Seven counties are working on their own plans and coordinated by the US 30 Coalition.

In Fort Wayne, work on a new plan is already moving forward because of an urgent need to improve transportation ahead of the construction of a new Amazon distribution facility.

In Kosciusko County, the looming difficult decisions will involve determining where to place a limited number of interchanges and overpasses and how to develop frontage roads that will provide access to businesses that would otherwise be cut off from the freeway.

Compared to other counties along the highway, Kosciusko County has a larger number of access points to the existing highway.

“Public input, once it starts this fall will be critical,” Thallemer said.

No dates have been set for INDOT “listening sessions.”