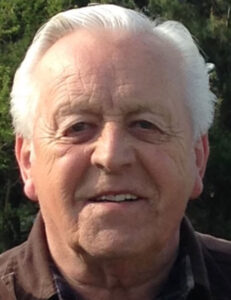 Ned was a 1962 graduate of Beaver Dam High School. He worked for Lau Industries for 42 years, retiring in 2010. While at Lau, he served as treasurer of the UAW. Ned farmed and ran his own body shop from home, in his spare time. He was a lifetime member of the Beaver Dam United Methodist Church. He served his community as the caretaker of the Nichols Cemetery since his father’s passing. He was a 10 year 4-H member and later became a leader of the Kosciusko County Horse and Pony Club. Ned also was a member of the Echoes of the Past Tractor Club. He was always a tractor enthusiast, especially Internationals. Ned’s prize possession was his father’s M, which he restored. He enjoyed parades, tractor drives and farming with his dad. He will be remembered as a loving husband, father and grandfather.

Ned was preceded in death by his parents and a brother, Ernie Heighway.

The interment will take place following the service in the Nichols Cemetery, Akron.

Memorial contributions can be made in his memory to the Echoes of the Past or Wheels on Fire with checks written to the Beaver Dam Church or Nichols Cemetery.