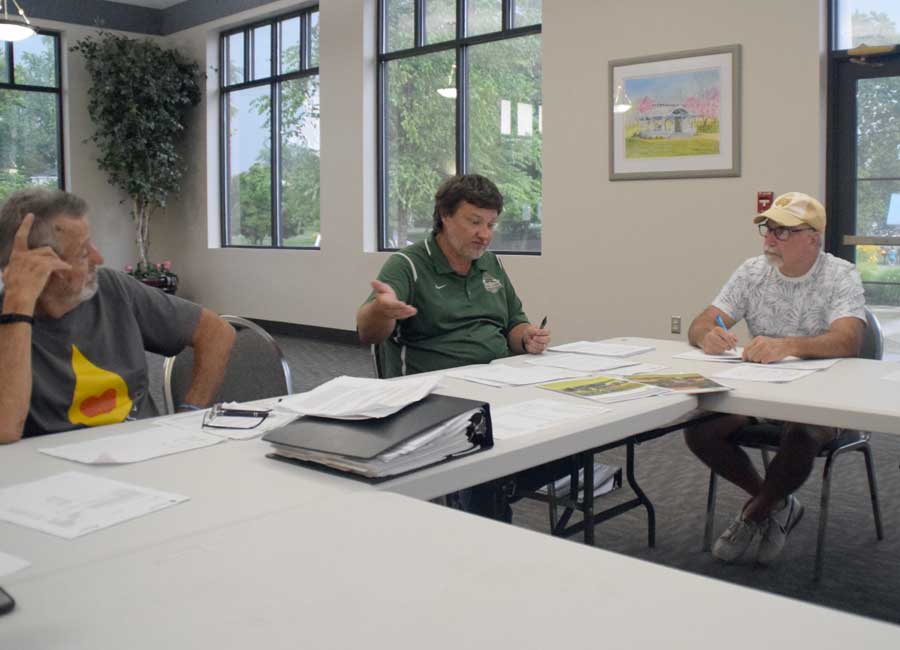 SYRACUSE — The playground is installed, the surfacing work is done with just a cement pad yet to be installed.

The fields are mostly graded with some work still to be done on the youth football field. Such was the progress report on Schrock Fields the Syracuse Park Board heard during its regular meeting Monday night, Aug. 8.

Chad Jonsson, park superintendent, suggested if progress continues and the fields are done by the end of August, as anticipated, the board hold its September meeting at the field for a walk-through.

Board member Jeff Nicodemus asked about fencing around the complex. Jonsson explained there will be decorative fencing on the east side of the complex and privacy fencing on the north and west sides; the south side is bordered by a soybean field.

The board moved on to discuss a number of equipment purchases, The board approved purchasing a 72-inch 1570 Terrain Cut mower with rear discharge for $34,755.20 for the Schrock Fields. The mower will be purchased from Greenmark Equipment in Warsaw.

The board was presented with quotes from Bobcat of Warsaw and Greenmark Equipment of Warsaw for a multiple purpose vehicle. This vehicle will replace the gator the park department has been using for a number of years. Jonsson suggested board members review the quotes and bring any questions to the September meeting.

The board approved spending $7,224.30 on rubber mulch for the playground at Lakeside Park. The mulch is expected to last 10-15 years while wood mulch has to be replaced about every two years. Weeds also tend to grow in the wood mulch while they won’t in rubber mulch.

The board instructed Jonsson to look at other options for replacing the sprinkler pump at the community center. The quote Jonsson provided from a local vendor was for $3,289.71, which seemed high to board members.

In reviewing the claims, Jonsson asked that $325 be added to reserve a bouncy house for the Harvest Fest slated for Saturday, Oct. 8. The board approved the claims with the additional expense.

The tree board is continuing work on its removal list as well as a small planting list for the fall. Two of the grant trees provided by ReLeaf of Michigan have browned out. Jonsson said he wasn’t sure what the issue was. He told the board if the trees have died they would be replaced.

Darin Lursen, program director, reported it was an eventful Tour des Lakes as a tree fell and brought a power line down right before riders were to start their ride. Riders were then re-routed through road construction to avoid the downed power line. Approximately 420 riders participated in the ride this year.

About 40 residents had their garage sales listed for the townwide garage sale held this past weekend. Registration for the indoor garage sale, which will be held Saturday, Oct. 15, will open at 4 p.m. Wednesday, Sept. 7.

Yoga will be offering a four-week fall session.