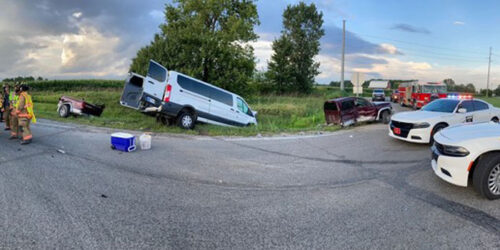 A photo provided by Indiana State Police shows the damage, including both parts of the pickup truck. The accident happened on US 27 south of Fort Wayne.

FORT WAYNE — There were only a few minor injuries among ten children in a passenger van that left a pickup truck split into two.

The accident at about around 7:15 p.m. Monday, Aug. 8, at the intersection of US 27 and Hoagland Road southeast of Fort Wayne. Indiana State Troopers found a pickup truck split in two pieces and a large passenger van with heavy front-end damage.

According to an investigation, a 2002 Dodge Dakota pickup truck, driven by David Mourey, 65, Hoagland, was traveling east on Hoagland Road and failed to yield the right of way to a Ford passenger van traveling on US 27.

The Ford passenger van, driven by Holly Mohr, 41, Auburn, crashed into the side of the pickup truck, ripping the truck in half. As a result of the crash, there were several entrapped occupants in the van, which had to be rescued by fire/rescue personnel.

There were 10 children passengers in Mohr’s van, ranging from the age of 6 months to 15 years.

Fortunately, Mohr had all 10 of her children properly restrained, as well as herself, according to a news release from Indian State Police.

There were some minor injuries reported with a few of the children; however, proper seatbelt restraints coupled with properly deployed airbag technology in the van were the keys to serious injury prevention, police said.

Regardless of injury status — due to the severity of the crash, all the children were transported to a local area hospital for medical evaluation, as were both drivers.

Alcohol was suspected as a factor in this crash. Mourey was less than cooperative with troopers investigating at the scene. He was admitted to an area hospital for his injuries. The case was turned over to the Allen County Prosecutor for review of possible charges.

This is an ongoing investigation.