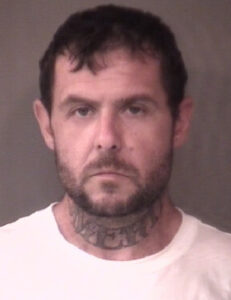 WARSAW — A Warsaw man was recently arrested for illegally possessing a gun as a convicted felon.

On July 23, a Warsaw Police officer noticed a vehicle drive left of center two times on Winona Avenue. The officer pulled the vehicle over and identified its driver as Shriver.

According to court documents, as the officer was preparing to use a K9 unit, Shriver said he had a bag of marijuana in his pocket. Since Shriver had marijuana on his person, a search was conducted on the vehicle.

While searching the vehicle, officers found a plastic bag containing 3.8 grams of methamphetamine. The bag of marijuana on Shriver’s person weighed 4.6 grams. Officers also found a handgun, a handgun magazine and drug paraphernalia. The handgun had a magazine inserted and a round in the chamber.

Shriver said the methamphetamine and paraphernalia belonged to him. He told officers he knew his relative’s handgun was in the vehicle.

Shriver is considered a serious violent felon, having been convicted of dealing methamphetamine in May 2020 in Marshall County. Shriver’s probation in that case was terminated in June 2022.