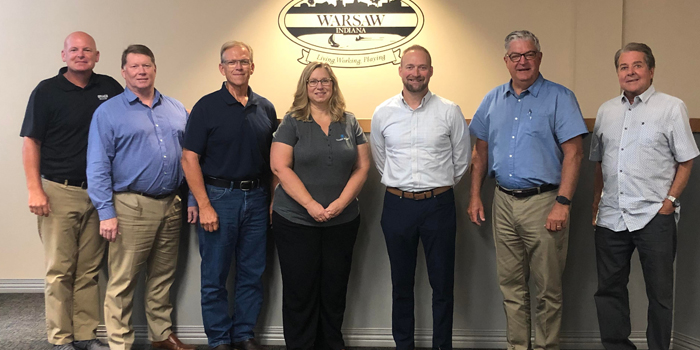 WARSAW — Zimmer Biomet Foundation has stepped forward as the source behind a $2.5 million donation that will be used for the Center Lake Pavilion renovation project.

The donation was first announced during a Warsaw Parks and Recreation Board meeting in April, but the donor’s name was not revealed until Friday, Aug. 5 at the Warsaw Board of Public Works and Safety meeting.

“We’ve been very fortunate enough to work with Zimmer Biomet (Foundation) on this project, planning this project, upgrading a very important part of our community,” said Warsaw Mayor Joe Thallemer. “This project will be fantastic. It’ll involve a complete remodel of the pavilion, increasing the capacity of it, opening the pavilion up to the lake.”

Thallemer said the last remodeling work that happened to the pavilion was after the building sustained damage from a fire in the 1990s.

The donation, Thallemer said, represents “a grand gesture of their commitment to the city of Warsaw.”

“We are very humbled to accept that donation, to strike an agreement and to thank (Zimmer Biomet Foundation) for their support of this community,” said Thallemer.

The renovation plan was developed in collaboration with Thallemer, Warsaw Parks & Recreation Superintendent Larry Plummer, and the Zimmer Biomet Foundation.

“The ZB Foundation Board of Directors unanimously approved the grant to advance its commitment to the local Warsaw community and the City of Warsaw, where ZB has been headquartered since 1927,” read a press release from Zimmer Biomet.

“We wanted to give back to the entire community in a meaningful, long-term way,” said Adam Griner, manager of corporate social responsibility at Zimmer Biomet Foundation. “We look forward to the progress of the pavilion and its use by the community in the future.”

The Board of Public Works and Safety approved an agreement with Zimmer Biomet Foundation for the Center Lake Pavilion project during the meeting.

“They (Zimmer Biomet Foundation) could have chosen a lot of opportunities within the city and they chose the Center Lake Pavilion,” said Plummer. “They’re putting that value into our community, into our parks system, and we’re very grateful for that.”

Prior to the announcement of Zimmer Biomet Foundation as the donor, the Board of Works awarded the Center Lake Pavilion project to CME Corporation, Fort Wayne. During a July 15 meeting, the board received two bids on the project and took them under advisement at that time.

According to City Engineer Aaron Ott, there was an oversight in the second bid from R. Yoder Construction, Nappanee, disqualifying it as a “responsive” bid.

The value of the contract with CME Corporation is $2,776,000. That figure includes acceptance of the alternates for fire protection and existing floor leveler installation.

Ott said a contract with CME Corporation has not been prepared yet but requested permission from the board to send a “Notice to Proceed.” This would allow CME Corporation to lock in the pricing while the final contract is prepared.

The board approved sending a notice to proceed to CME Corporation.

Also during the meeting, the board opened and approved bids for 2023 fuel prices for the city’s police and street departments. Each department received one bid.

WPD Captain Joel Beam also requested permission to purchase 28 FirstVu Pro High Definition body cameras with a five-year subscription plan that includes cloud storage. The contract is with Digital Ally, which WPD has worked with for over a decade.

Dustin Dillon, Warsaw’s public works superintendent, attended the meeting regarding bid changes for Phase Two of reconstruction of Hodges Addition. In July, the project had been awarded to G&G Hauling and Excavating, Warsaw.

Dillon said when the city’s contract with G&G was submitted to the Indiana Department of Transportation for a Community Crossings Grant, the city was notified that G&G is not a pre-qualified contractor with INDOT.

Dillon requested the board reject G&G’s bid and award the project to Phend & Brown, Milford, in the amount of $1,200,159.84. The board approved Dillon’s request.

In other business, the Board: