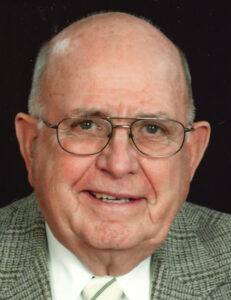 He was born July 27, 1930, in Roanoke, to Harold A. and Margaret B. (Hine) Geiger. Robert lived most of his life in the Elkhart/Kosciusko County area.

Robert was a former owner/operator of Lentz Coal Company, Milford. After that, he worked for 14 years for Smoker Craft, New Paris, then he retired from Chore Time in 1996 after 18 years. He was a member of Living Gospel Church, Nappanee, and the Wawasee Camp of the Gideons International, Syracuse. He was a former board member of the Lakeland Child Evangelism Ministries, Warsaw, member and past president of the Milford Lions, Milford Masonic Lodge and Life member and past commander of the American Legion in Milford. He also formerly served in the Milford Fire Department.

A family memorial service will be held Sunday, Aug. 7, at Thompson-Lengacher and Yoder Funeral Home, Nappanee, with burial to follow at Milford Cemetery with Military Graveside Rites by Milford American Legion. Memorial contributions may be given to Milford Fire Department.