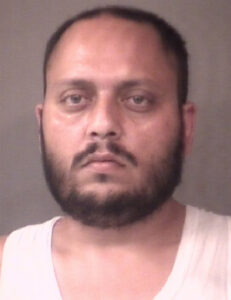 SYRACUSE — A Syracuse man was arrested after allegedly battering a woman while in the presence of four children.

On July 22, a Syracuse Police officer responded to a domestic dispute. Prior to arriving at the scene, the officer was informed that a man and woman were yelling at each other. The woman eventually told 911 that the man had attacked her.

Upon arrival at the scene, the officer spoke with the woman. According to court documents, the woman said she was in an argument with Singh, and that Singh allegedly hit the woman with an open hand about three or four times, causing the woman to fall to the ground.

Singh then kicked the woman several times in the stomach and thigh. The officer noticed redness on the right side of the woman’s face and ear. The woman said four children in the home saw the incident take place.

Singh told the officer there had been an argument but denied anything physical occurring. When Singh became aware the woman was attempting to contact 911, he forcibly took the phone away from her, stating that he did not want law enforcement at the home.

When police searched Singh, they found marijuana and a blue pen that had been fashioned into a smoking device.

Singh has already been arrested and released on bond. He has an initial hearing at 1 p.m. Friday, Aug. 5, in Kosciusko Superior Court Two.