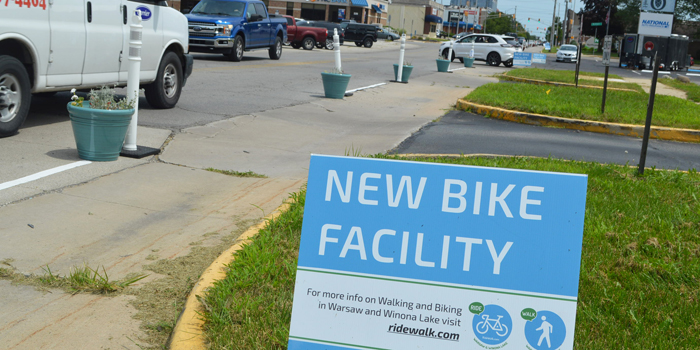 The temporary bike lane was recently established on a two-block stretch on West Market Street outside of the U.S. Post Office in Warsaw. Photo by David Slone/Times-Union.

WARSAW – City Council Member Cindy Dobbins let the Traffic Commission know on Wednesday that she was not happy with the establishment of a temporary bicycle lane in downtown Warsaw.

The temporary bike lane on the south side of Market Street between South Columbia and Lake streets were established last week and will continue through the end of September to help facilitate the completion of a pathway from the Chinworth Bridge to Winona Lake. A ribbon-cutting ceremony was held Tuesday afternoon for the lanes.

“I was blindsided Thursday morning when I came to work. I had citizens, merchants reaching out to me,” Dobbins said Wednesday, Aug. 3, during the traffic commission meeting. “Since we’re concerned primarily with safety, I will address that. There were several other concerns.”

She said one of the concerns involving the intersection of Lake and Market streets, “it causes the straight right-hand turn lane and the left-hand turn lane to encroach upon one another, and I think perhaps that’s how we ended up getting one planter obliterated and so many had to make a quick move.”

Dobbins said she’s been approached by people who drive oversized trucks or vans who said in order to make a right-hand turn as they come out of the U.S. Post Office, they are forced into the lane of oncoming traffic so they have to be very careful there.

On Saturday morning, she said, she received two calls/messages from folks who “came close to witnessing accidents with particularly elderly people who got confused about what was going on as they were leaving the post office. Just a lot of concerns about the congestion around the post office.”

She said she would feel remiss if she didn’t bring the concerns up to the Traffic Commission.

“I’m disappointed that we didn’t get to discuss the safety concerns before it happened,” Dobbins stated.

Assistant City Planner Bekah Schrag, who also chairs the Ride+Walk Advisory Committee, said the original plan was to bring the temporary bike lanes to the Commission in July, but then learned the meeting was cancelled. She did reach out to Traffic Administrator Lance Grubbs and Warsaw Police Department Capt. Joel Beam, who sits on the Commission, because she wanted to make sure people knew what was happening and got the design approved before it was implemented.

“But we should have done a better job of getting it out to the public, so I appreciate your concerns and I do take them seriously,” Schrag said. “It is temporary. It is through Sept. 28.”

There is a survey on the Ride+Walk Facebook page and website and is posted along the temporary track.

“We really appreciate anyone who takes the time to fill out the survey and list their complaints and their concerns because that’s all really important information to have moving forward. The ultimate goal is to connect Warsaw and Winona Lake with safe bicycle infrastructure, and this is one way to test whether or not this is a good solution, what can we change, how can we make it better, how can we make it work for everyone on the road,” she said.

Dobbins asked if they had a way of quantifying the number of bicycles that are trafficking through there.

Schrag replied the Michiana Area Council of Governments is putting up a trail counter either Wednesday or today so the people using the trail currently can be documented. She believed MACOG also was going to leave the counter up for a few weeks after the temporary lanes are taken down to see how many people are just using the regular sidewalk so the differences can be compared.

Council President Jack Wilhite asked if there was anything else MACOG would be checking on, like accidents or near-misses.

Schrag said they would be keeping track of any accidents that happen as “that’s really important to know how it happened, where it happened and how we can keep it from happening in the future.” She said she had no way of recording near-misses at this point.

Mayor Joe Thallemer said the goal of the website is to take comments, including those about what happens along the trail.

“Certainly, we’re concerned with safety, but we’ve got a problem getting bicycles through town and we’re trying to find a solution. So, I think, this is a very good exercise to look at this on a temporary basis, make people aware and just learn from it. This isn’t permanent,” Thallemer said.

Dobbins said her concern was that they do so without having a negative impact on the downtown businesses. She said they didn’t know what was going on and if all the parking would be closed off.

Thallemer said there’s never been any intention to eliminate parking as part of a solution. “That’s been made clear from the onset,” he said.

Street Superintendent Dustin Dillon said he’s been paying attention to the road and at first he had some concerns. “After watching this multiple different days, at different times of the day, the original safety concern is not near as bad as what I thought it was. There seems like there’s plenty of room for people to get by,” he said.

City Planner Justin Taylor said the safety benefits of narrowing some travel lanes to encourage people to slow down a little bit are “more than anecdotal at this point. We have all kinds of data about survivability of accidents when they involve a pedestrian and a motor vehicle when speeds are lowered. We definitely want to encourage people to drive more cautiously downtown.”

He said the city has seen how bike lanes on streets like Fort Wayne and Main affect the average speed and lower those average speeds through neighborhoods and improve safety. When the city begins to look at more permanent bike lanes, he said all the data they collected will be revisited.

Schrag said because the lanes in place now are temporary, they can make easy fixes as needed.

Beam asked if the Ride+Walk Committee made contact with businesses along that route, and Schrag said yes and they were all in support.

“Well, I applaud you and I like the idea. I hope it succeeds,” said David Allbritten, Commission member.

Grubbs asked Schrag to report back to the Commission in the future with anything she might have, and she agreed. Thallemer asked Schrag to communicate with Dobbins if there are specific issues like planters being obliterated.

“There’s a lot of traffic that goes down by the post office,” Grubbs said.