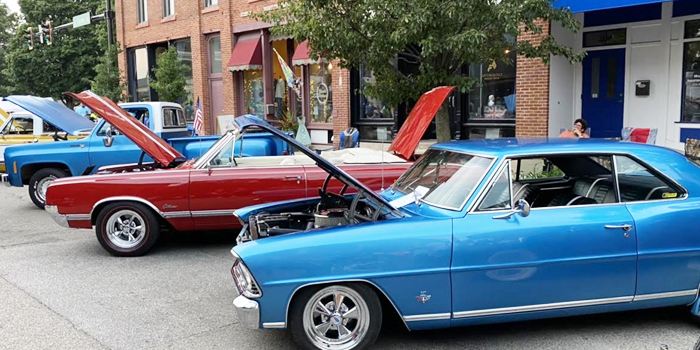 Vehicles sit lined up in downtown Warsaw as part of the 2021 Baker Youth Club car show in this InkFreeNews file photo. This year’s show is set for tomorrow, Aug. 5.

WARSAW — A car show for a local organization helping kids is tomorrow, Aug. 5, during First Friday.

Baker Youth Club of Warsaw will receive 100% of the proceeds raised from both the show and a silent auction, said BYC Executive Director Tracy Furnivall. The organization offers before and after school and summer programs for kids.

From there, they will pay the $15 entry fee and be directed where to park before officially registering at the courthouse square. Judging ends at 7 p.m., with awards being announced at 7:45 p.m.

Furnivall said he hopes to have 150 vehicles entered in the show, with him noting that about 120-130 were in last year’s event. Last year the car show raised $13,000 for BYC.

First Friday itself, put on by Main Street Warsaw, runs from 5-8 p.m. There will be food vendors and music by DV8.

Furnivall said Friday’s event will be “a great fun family atmosphere” and noted that the car show is “a great complement to the efforts of (Main Street Warsaw’s work with First Friday).”