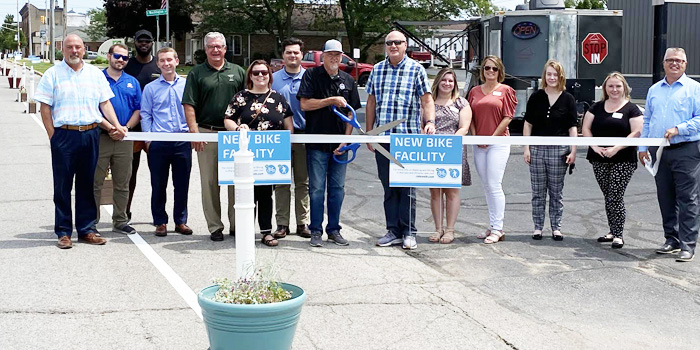 WARSAW — A step towards making the Warsaw-Winona Lake area better connected was celebrated on Tuesday, Aug. 2.

The Kosciusko Chamber of Commerce had a ribbon-cutting for a new temporary bike lane that’s been set up on two blocks along West Market Street, from Columbia to Lake Streets, in downtown Warsaw.

Flower pots, traffic sticks and markings were set up last week to create a lane in an effort to gauge whether the public would be comfortable with a permanent bike lane being set up there.

Fred Helfrich, who serves on Warsaw-Winona Lake’s Ride Walk Advisory Committee and helped create the temporary lane, noted it will be out for about two months.

“It’s a buffer space for cyclists and pedestrians away from traffic,” said Helfrich. “This is sort of an experiment to see how do we  … get the cyclists safely through the downtown in a space that they’re comfortable with.”

The goal is to have one continuous bike path from Chinworth Bridge west of Warsaw, to Christ’s Covenant Church in Winona Lake.

“This brings it out to the public so that they can understand how it works, how traffic patterns might differ a bit, accommodate folks to get through to get into our downtown to get to the parks, to get to the schools and to get to our farmers market and to enjoy our downtown, to connect Winona with Warsaw to go from one end to the other,” said Warsaw Mayor Joe Thallemer.

Thallemer noted that if the permanent route is finished, no parking will be lost downtown because of it.

“We will not be eliminating any parking,” he said. “Temporarily, it may look like it with this, but the way the thing’s designed, all parking remains. So that’s something that is very important to understand right up front.”

“It makes our community a lot more connectable,” added Thallemer. “We’re standing across the street from a potential large residential project (at the site of the former Owen’s) that’s again going to connect our communities, be a part of our community and we want it to all be connected.”

Helfrich noted there’s a link to a survey gauging the public’s opinion regarding the temporary lane on the Ride Walk Advisory Committee’s Facebook page.