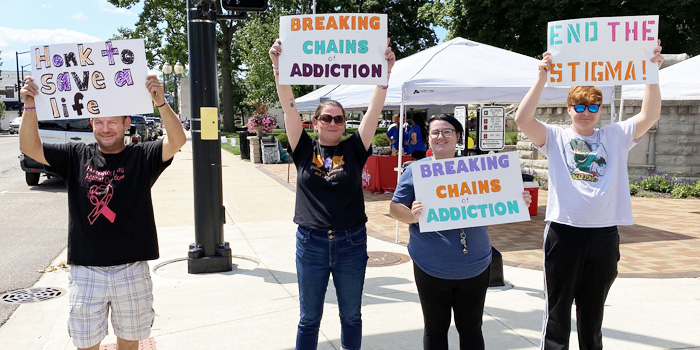 The organization Walking in Awareness and Recovery (WAR) held a rally outside the Kosciusko County Courthouse on Friday evening, July 29, to raise awareness about drug and alcohol addiction. The group was started by Brandi Shepherd, second from the left in the photo, who lost both her mother and brother to addiction. Also present was Jerry LaCroix, left, the founder of Huntington United Against Overdose, a similar organization he started after his nephew died of an overdose. InkFreeNews photos by Leah Sander.

Some were their own; others their family members’. All had to do with the same thing: dealing with the results of drug and alcohol addiction.

People gathered at the Kosciusko County Courthouse on Friday evening, July 29, as part of Walking in Awareness and Recovery’s rally. The new organization started by Brandi Shepherd of Warsaw aims to bring awareness to addiction and help those locally dealing with it.

Friday’s event included attendees holding signs speaking against addiction on the courthouse corner and walking around the courthouse with them. People made their own signs, with some of them including on them the date they got sober.

Attendees could also write the names of people they knew who had passed away from addiction on signs with faces on them lined up around the courthouse.

Shepherd was one of the speakers at the event.

“I’m the other side of addiction,” she said. She lost her brother to a fentanyl overdose in 2021 and her mother to alcoholism in 2005.

She shared how her brother tried to be sober, but ultimately succumbed to his addiction. Afterwards, Shepherd said she felt “broken.”

“God, I feel broken. I feel crushed. I don’t know how I’m ever going to live life again,” said Shepherd of what she recalled thinking after her brother’s passing.

She recognized that even though she could no longer help her mother or brother she could help others.

That led her to start WAR this year. Shepherd also mentioned how she’s working to finish her degree in substance abuse psychology to help others.

“If we can just help one person, just helping the next person in need however that looks, whether it’s in knowledge, education, or whether it be in their recovery,” she explained to media members earlier of what WAR’s purpose is.

She’s working to make WAR a 501(c)(3), or official nonprofit, and wants to eventually have a space to offer such things as support groups and training people to use Narcan, which helps with opioid overdoses.

Shepherd had told InkFreeNews earlier that said she and other members of WAR were inspired to have a rally after attending Huntington United Against Overdose’s similar event in June.

That organization was started by Jerry LaCroix, who also spoke Friday.

He shared how he has been sober himself for five years after being addicted to spice. LaCroix lost his nephew at age 25 to an overdose in 2021 on the exact date that Shepherd’s brother died of an overdose.

“It just opened my eyes to so much stuff,” he said. “I stood on a corner by myself (in Huntington) with two signs (talking about addiction). That’s how Huntington United Against Overdose started.”

“We’re growing by the day,” LaCroix told InkFreeNews earlier. “We’re working with the probation department and the drug court program in Huntington, and it’s really turning out to be a blessing for everybody.”

“If you’re doing drugs, no judgment, reach out and get help,” he added.

Future plans for WAR include Shepherd and some of its other members heading to a national rally against fentanyl put on by the group Lost Voices of Fentanyl. It will be Sept. 17 outside the White House.

To learn more about WAR, people may visit its Facebook page. 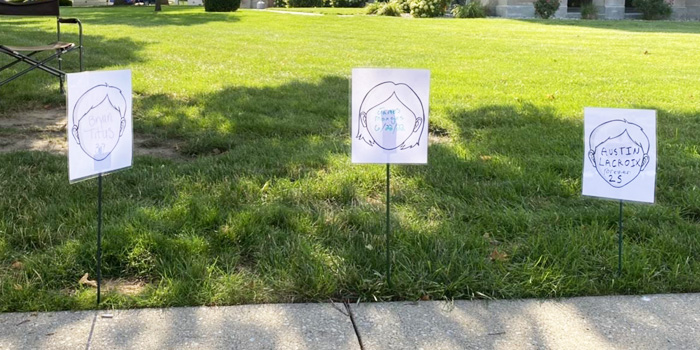 Attendees at the rally could write the names of people they knew who had died from addiction on signs with faces on them around the courthouse lawn.