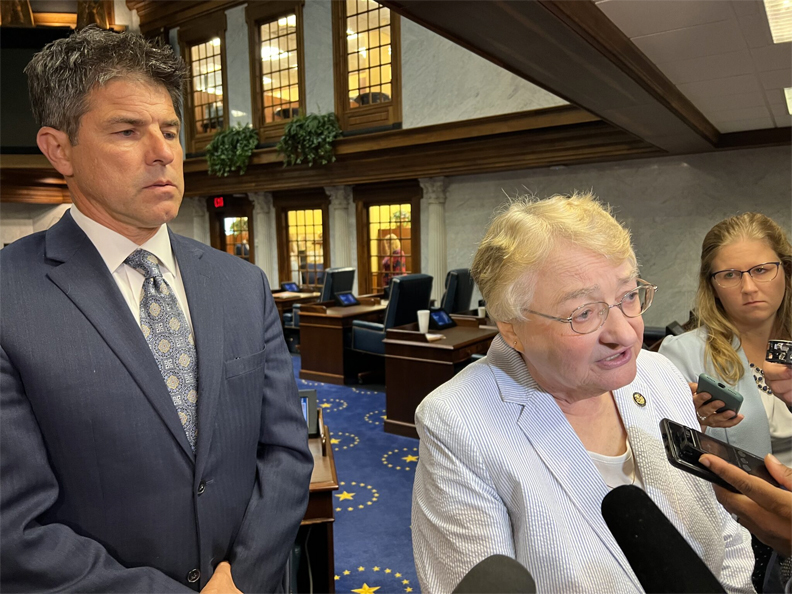 INDIANAPOLIS – Indiana lawmakers narrowly voted Saturday, July 30, to advance a Republican-backed bill that would ban virtually all abortions in the state.

Senators debated the bill for more than three hours before voting 26-20 on the bill during a special legislative session. That was the fewest number of votes needed to advance the bill to the House chamber, where it will be debated next week.

“I’m glad to see that we’ve gotten to this point,” said bill author Sen. Sue Glick, R-LaGrange, who noted that her legislation would put a halt to about 98% of all abortions in Indiana. “It’s an issue that’s been with us for many, many years … and it won’t go away. I think it’s important we keep our minds open and we keep the ideas flowing.”

Indiana could be the first state to approve new legislation restricting access to abortions since the U.S. Supreme Court ruled last month to overturn Roe v. Wade. West Virginia lawmakers on Friday refused to pass their bill to ban the procedure.

Glick, along with Senate President Pro Tem Rodric Bray, said they expect the House to make amendments to the bill. What those changes could be are still uncertain.

Still, Glick said she won’t give blanket support to any version of the bill that could pass out of the House.

“I can’t open up abortion-on-demand – walking in and saying, ‘I want abortion for any reason, at any point during the pregnancy.’ That’s not where I personally am,” Glick said. “If that’s in the bill, I wouldn’t carry it.”

Glick said she has “a deep feeling” that lawmakers need to approve more wraparound services. She’s also worried that the current bill “interferes” with doctor-patient relationships, which she hopes is addressed in the House.

The Indiana State Medical Association (ISMA) raised the same concern, saying in a statement Friday that the legislature is “creating an atmosphere that is being perceived by many physicians as antagonistic toward their profession.”

“Indiana cannot have an effective health care system if the training and expertise of physicians is not respected and they are under constant threat of political interference for practicing medicine and assisting their patients,” said ISMA executive vice president Julie Reed.

Hundreds of abortion rights proponents rallied in the Statehouse halls Saturday, cheering and clapping as senators in the minority caucus argued the bill is a form of government overreach that infringes on women’s right to access “basic” healthcare. The cheers turned to booing, chanting and shouting during Republicans’ remarks.

“You said this is not a forced pregnancy bill, and I am here to tell you that it is,” said Sen. Tim Lanane, D-Anderson. He emphasized that the bill would “force” some women to remain pregnant, which he said would lead to “more back-alley abortions.”

Sharing her own story, Sen. Shelli Yoder, D-Bloomington, said she went to Planned Parenthood three times during her pregnancy, considering an abortion. She opted not to get an abortion but said she needed all 20 weeks allowed under current law to make that decision. The bill takes that choice away from other women.

The exception for rape and incest — which sets an 8-week limit on abortion for those age 16 or older — is “nothing,” she added.

“This bill will bring terror and despair to thousands of women,” Yoder said. “This bill is cruel, invasive, mired in hypocrisy, a grave misunderstanding of science and medical expertise.”

Sen. Jean Breaux, D-Indianapolis, added that Democrats have “tried to make a bad bill better” with various amendments, although nearly all were struck down.

“It is a consequential piece of legislation that can harm women, children and families,” she said. “The global trend is toward a liberalization of abortion restrictions. But Indiana is reverting backwards.”

In his impassioned remarks, Sen. Faddy Qaddoura, D-Indianapolis, said he refused “to play God.” He called on the General Assembly to instead invest in healthcare and education.

“We’re rushing through a political process at the expense of women,” he said.

Few senators in the GOP supermajority spoke on the bill. All who approached the mic were opposed to the measure, though bill-supporter Sen. Liz Brown, R-Fort Wayne, rose to question several Democrats on their positions. A handful of Republicans additionally gave brief remarks in support of the bill as they voted.

Sen. Mike Young, R-Indianapolis, who recently resigned from the Republican caucus amid disagreements over the GOP approach to abortion-restricting legislation, was one of 10 Republicans who voted against the measure.

He said he disagreed with the bill’s requirement for women to submit a notarized affidavit to their doctor to access an abortion in cases of rape or incest. He also took issue with language that allows the procedure to preserve the health of the mother rather than just the life.

Young’s contentious amendment that sought to remove exceptions for rape and incest failed earlier this week. That was after an hours-long debate that saw Republican senators emotional and divided on how far the proposed abortion ban should go.

But Kyle Walker, R-Lawerence, said he’s in the “gray area” between the two poles of the issue. Favoring some restrictions, Walker said it should be possible to write a more balanced bill.

“I believe in a balanced approach to this policy,” he said, saying women should be allowed to “make their own decisions” in at least the first trimester. He also supports exceptions for “both the health and life of the mother,” as well as “reasonable exceptions” for rape and incest.

Vaneta Becker, a Republican from Evansville, said she opposed the abortion ban because “it violates all of my Republican principles.”

Bill heads to the House, but do Hoosiers want the ban?

Republican House Speaker Todd Huston said Friday he hadn’t yet reviewed the bill. He told reporters he would address the proposal next week, but said he supported exceptions for rape, incest and life of the mother in an abortion ban.

On Saturday, Glick acknowledged for the first time a highly-guarded poll conducted by the House and Senate GOP campaign committees. Multiple GOP insiders who spoke to the Indiana Capital Chronicle said the poll indicates that Hoosiers don’t want a near-virtual ban on abortion.

Instead, people in Indiana support exceptions for rape, incest and the life of the mother. And many are supportive of allowing abortion up to 15 weeks of gestation.

Glick maintained Saturday that the poll “is one of several” reviewed by GOP lawmakers in recent months.

“I think that we seize on (polls) sometimes that agree with what the direction we want to go. And then we disregard others,” Glick said. “I think there are vast differences of opinion — and that goes to the people on the street, to people in this building.”

Huston did not acknowledge the poll’s existence on Friday, however.

“We come here as representatives of our districts and people that have strong opinions … wherever we land is what our caucus believes is the right public policy for Indiana,” he said. “Myself and everybody’s always been clear on our positions on this. We’ve had elections with clear views on this … we’ll have elections moving forward.”

Ten Republican senators and 10 Democratic senators voted against the bill. The GOP lawmakers were:

Four senators were not present for the vote: