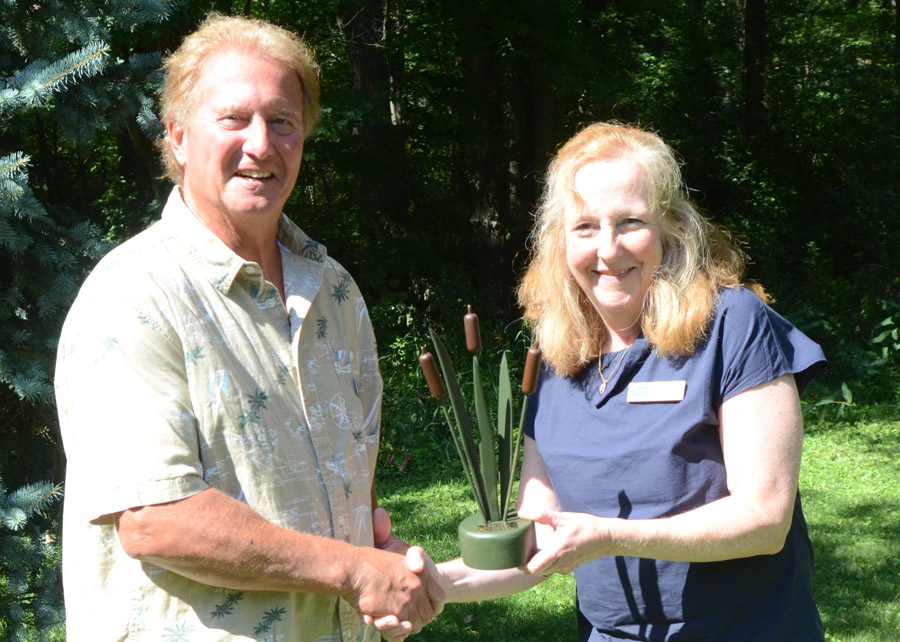 SYRACUSE — The 2022 Wawasee Area Conservancy Foundation’s Cattail Award recipient Bill Hess skied in the wetland areas of Conklin Bay and Johnson Bay as a young man. Then he went to Colorado State University and learned the importance of the ecosystem while studying for a degree in natural resources.

He saw the areas where he used to ski being attacked by large developers and being destroyed. He talked to his father and they found the right people living around the lake to help get a line drawn in the sand to stop the destruction and have protected areas.

Hess, who is going off the Wawasee Area Conservancy Foundation Board, has served since 2013. He has served as co-chairman of the healthy shorelines committee and was responsible for the yearly installation and removal of the ecozone buoys around the lake. 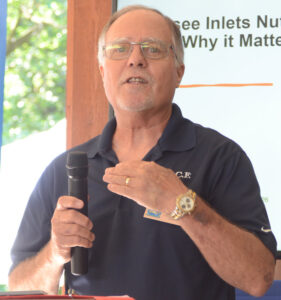 John Bearss, WACF Board Chairman, gave the opening remarks giving examples how “everything is connected.”

It has been for his efforts with the ecozone that he was awarded the Cattail Award at the Lake Celebration Saturday, July 30. The award is presented yearly to someone or persons who have given time, talent and resources to WACF and has a passion to preserve the quality of the Lake Wawasee Watershed.

Hess shared his story that has led to the Johnson Bay and Conklin Bay areas being protected. “It’s good to get this,” he stated. “I appreciate this.” Hess has also donated the “old family pontoon” that he has used to install the ecozone buoys to the conservancy for future use in that endeavor.

The annual Lake Celebration is a time when the Cattail Award is presented, outgoing board members are recognized, new board members announced and an update on WACF projects including the Wawasee Inlets Nutrient Study.

In addition to Hess, outgoing board members included Dan Berkey, who has been with WACF for at least 27 years and was one of the people instrumental in starting the Friday Canoe Trips; and Rick Winter, who it was said had served the shortest term on the board.

Three new board members, each with a long family history on the lake, will be Tom Cattrell, Becky Levinson and Cindy Peterson. It was stated that Peterson will become the chair of the education committee.

During his opening remarks, John Bearss, chairman of the board, answered a question he had been asked: “What have you learned being on the board?” He stated he learned “everything is connected.” He provided examples of how the canoe trip gives an example of how one effect affects the rest and how everything is linked together. He recognized the hard work and success of funds has directly worked to protect the watershed and those targeted efforts make a difference.

The key speaker for the celebration was Dr. Jerry Sweeten, Ecosystems Connections Institute, with an update on the WINS project, a comprehensive analysis of nutrient and sediment loads. He spoke of the importance of having data to help understand what is coming in and out of the lake and how to mitigate what is coming in and how the lakes function. 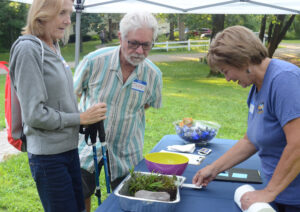 He provided information on the study, what is being looked at, how and where samples are taken and shared some data. Among the data shared were a large rain event and a drought. Numbers collected provided percentages of the water replaced every year. The example provided was in 2019, 45% of the water was replaced, but only 28% in 2020 and 42% in 2021. Other numbers provided were the amounts of nitrogen and phosphorus. What the data has shown is that the lake “changes every year. It takes an extended period of time (to know information).”

Looking at the sediment coming into the lake, Sweeten stated he did not know of a permit available that would allow that much to be dumped into a lake.

Sweeten did note that sampling locations were retooled in 2022 with Turkey Creek having two gauges moved upstream to help quantify the numbers being recorded.

“We have more work to do to lead to solutions that lead to a cleaner lake,” Sweeten said, “if we do the right things, what the data is telling us.”

Guests also heard from Beth Morris and Joan Szynal, who provided facts and figures about the watershed and the National Water Quality Initiative program through the USDA and administered through the Natural Resource Conservation Service and Soil Water Conservation Districts for local farmers to utilize such programs as no-till, cover crops and buffer strips.

Recognition was also given to The Channel Marker for providing and donating the morning brunch. 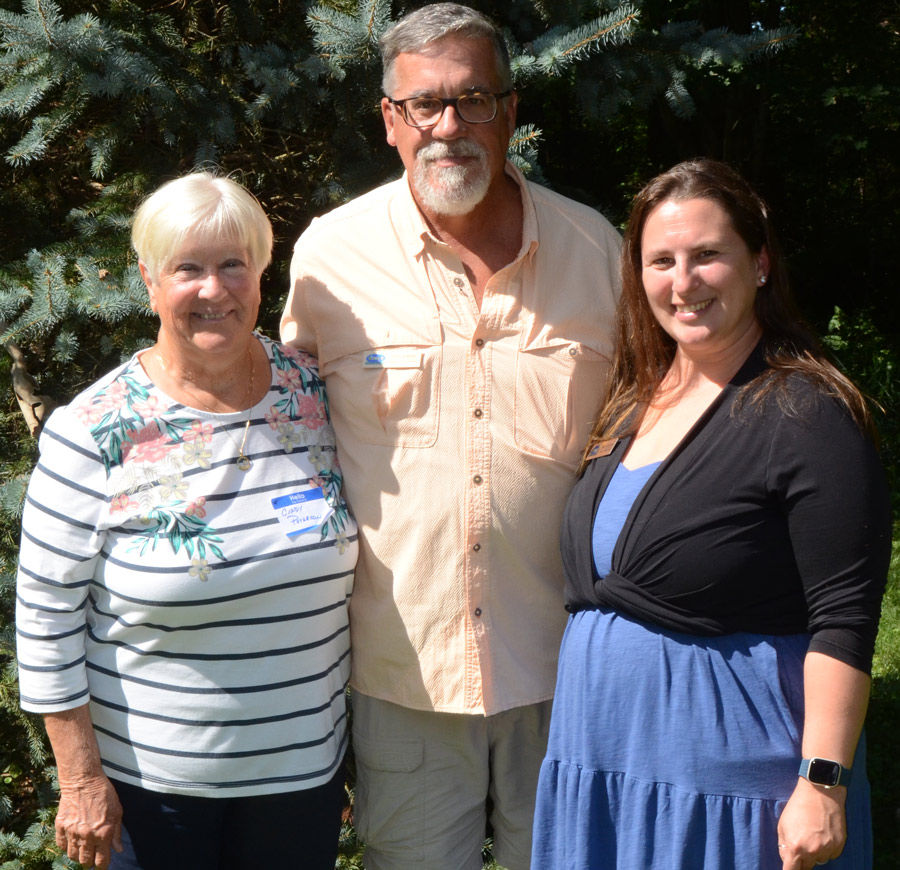 Incoming board members for the WACF are Cindy Peterson, Tom Cottrell and Becky Levinson. 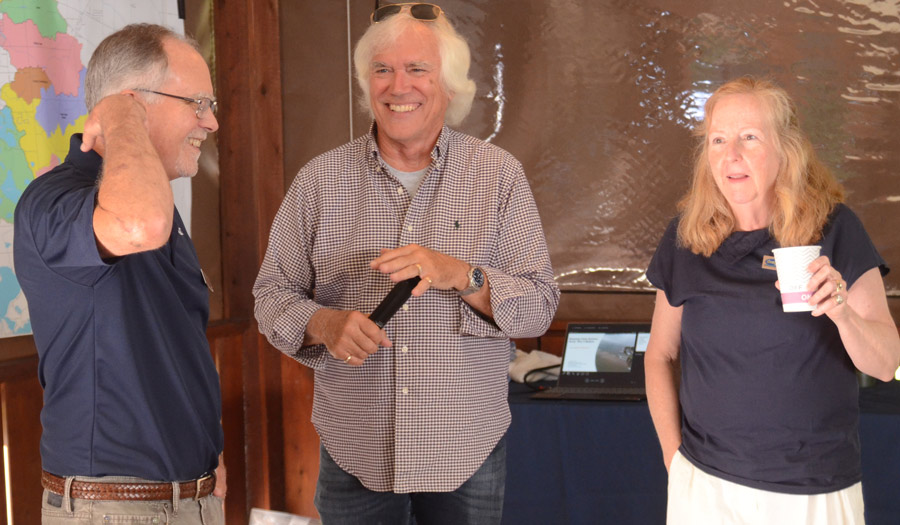 John Bearss, chairman; Chris Roberts, past chairman; and Heather Hardwood, executive director, get a few moments to talk before the Lake Celebration. 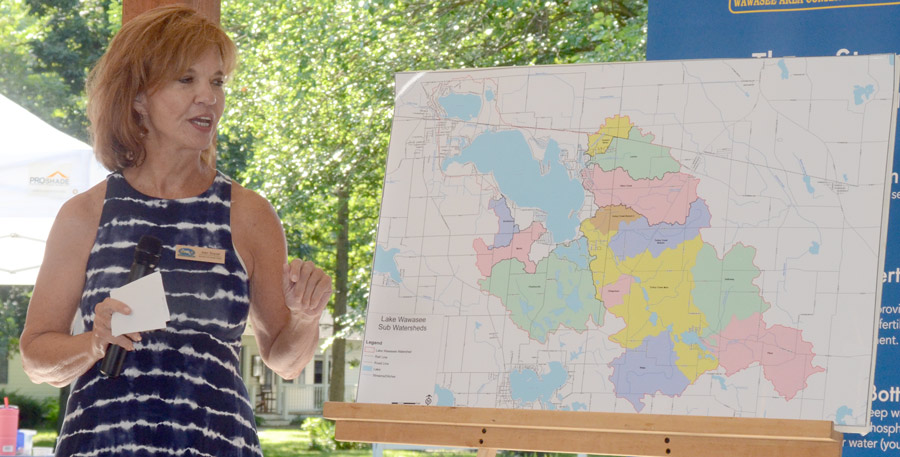 Joan Szynal uses a map to show the Lake Wawasee Watershed and the subwatersheds.

Another view of the attendees at the Lake Celebration.

A view of the crowd during the WACF Lake Celebration event Saturday. 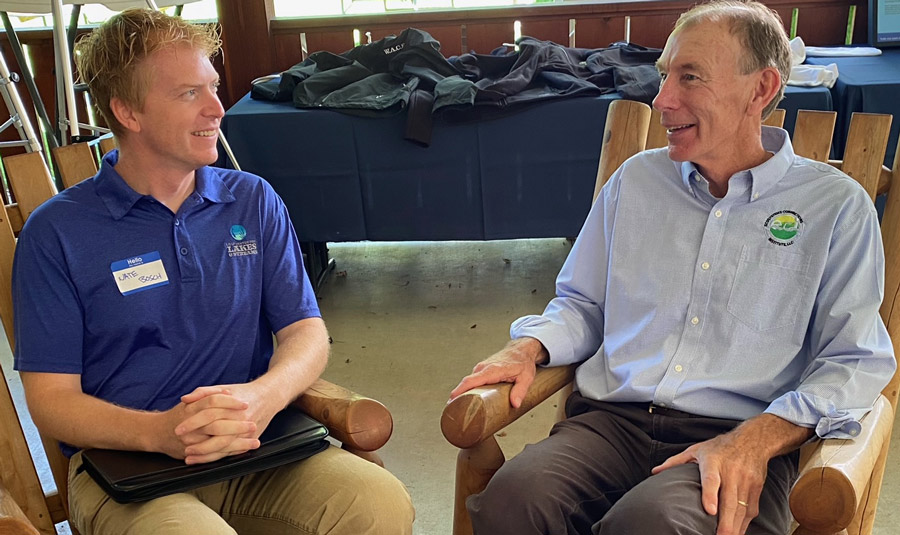 Dr. Nate Bosch, Lilly Center for Lakes & Streams and Dr. Jerry Sweeten, represent the brain trust of the entire watershed and the fight for clean water within it. Both will be aboard the Lillypad for the WACF Eco Cruise Saturday, Aug. 6. Photo by Chris Roberts.