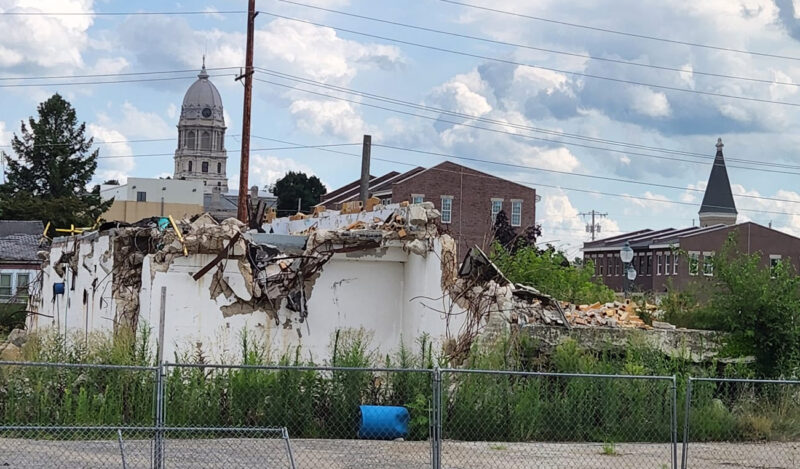 In fact, the city is cutting ties with Matthews LLC for the portion of the Buffalo Street redevelopment centerpiece – a four-story multi-use building overlooking Center Lake and Central Park.

The concept, which was originally proposed more than six years ago would have included apartments on land that included the old vacant Indiana American Water utility building and the city’s old parks office on Canal Street.

Demolition of the old brick utility building began more than a year ago but then stopped. The property is owned by the city.

After waiting a year, the city concluded it was not going forward under Matthews.

On Monday, Jeremy Skinner, the city’s community and economic development director, told the city redevelopment commission the city and Matthews had reached a “mutual agreement” about the property. He said the city is preparing to set forth a separation agreement in which Matthews’s scope of the project would be limited to the residential development.

Skinner said that fencing around the perimeter of the land has become a safety issue.

Commission member Rick Snodgrass pointed out that demolition is still the responsibility of the developer.

Skinner said there’s an urgency with the safety issues. He said he wants to get it leveled and seeded in hopes of attracting a new developer.

Skinner suggested nothing would change if the city doesn’t take action.

The city has already lined up a contractor to clear the land, level it and have it seeded. The redevelopment commission approved a bid from G&G Hauling and Excavating to do the work for $42,858.

The entire redevelopment project has been slow-moving and in the works for more than half a dozen years.

The Buffalo Street redevelopment project is tied to Regional Cities funding from the state.

In 2016, an agreement with the city called for Matthews to spend $10.5 million on the mixed-use housing project, which is tied to Matthews’ ability to tap into Regional Cities’ money.

Skinner said the separation agreement will allow Matthews a way to go forward.

“He can still achieve that goal by building all the townhomes and mews if he so chooses,” Skinner said.

“I would definitely like to see him finish that portion,” Skinner said.

The construction of townhomes began in 2019. Three townhomes have been constructed, but are still empty. Work on a row of mews next door also appears to have stalled.

A rendering of plans for the multi-use building was provided by Matthews in January.

Dave Matthews, the developer, attended a city council meeting in January and told city officials his plans had been slowed by the pandemic and then by the supply chain issues. But he also talked about plans for a multi-purpose building and provided a rendering of the plan.

It’s unclear what went wrong with the plan. Skinner suggested that’s a question for Matthews.

Attempts to reach Matthews Monday night were not successful.

In recent months, the subcontractor who owns the fence has been calling the city saying they want to remove the fence.

But the city doesn’t want the fence removed because of safety issues, Skinner said. 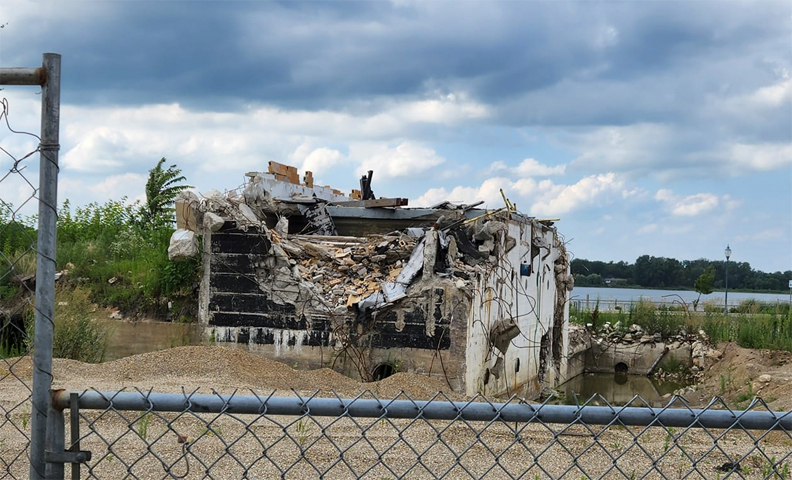 A view of the remaining Indiana American Water building. Demolition halted nearly a year ago. Center Lake can be seen in the background. InkFreeNews photo by Dan Spalding.