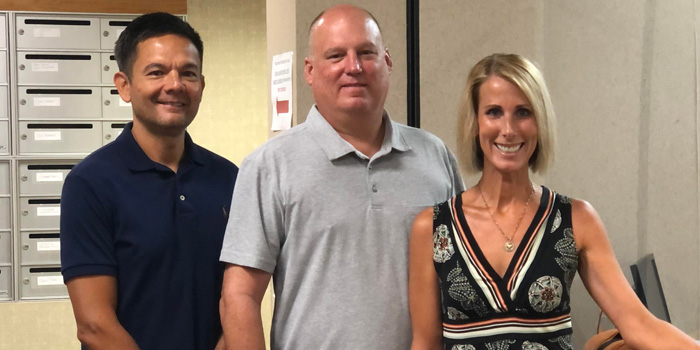 From left, are Tom Westerhof, Brad Johnson, and Heather Reichenbach. The group filed their candidacies for seats on Warsaw Community Schools’ Board of Trustees on Wednesday, July 27. InkFreeNews photo by Liz Shepherd.

Reichenbach and Johnson are currently on the board, representing Districts Two and Seven, respectively.

If re-elected, this will be Reichenbach’s third term and Johnson’s second term.

Westerhof has filed for District One’s seat, which is held by Mike Coon, who is not seeking re-election.

Westerhof has two children who attend Warsaw Community Schools and said he wanted to be more active in the decision-making process by vying for a seat on the school board.

“I’m involved in non-profits already and I saw this as a great opportunity,” said Westerhof. “I’m looking forward to being a voice for the community, teachers, employees of the schools, parents, and getting their input and making the best decisions for the kids.”

Westerhof has worked in education for over 18 years at Indiana University. He serves on the boards for CASA of Kosciusko County, the Warsaw Education Foundation, and the International Food Wine Travel Writers Association.

If elected, Westerhof said he wants to visit a WCS school once a month to talk with employees and teachers, as well as give parents and community members the opportunity to meet with him at local businesses.

“Being able to meet with people face-to-face is key,” said Westerhof. “I’m looking forward to the opportunity to represent my district.”

Reichenbach began serving on the board in January 2015 and formerly worked as the administrative assistant to Madison Elementary School’s principal. Reichenbach serves on numerous boards, including CASA of Kosciusko County and the Warsaw Education Foundation. She also serves on the legislative committee of the Indiana School Board Association and is currently the president of WCS’s Board of Trustees.

“One of the things that I’m pleased about is we have the highest starting pay in our surrounding area for starting teachers,” said Reichenbach. “I think continuing to build on valuing our professionals and our teachers in the corporation, making sure we’re being good stewards, is important. I’m excited that we’ve expanded STEM, DLI (Dual Language Immersion). Warsaw Community Schools is unparalleled in what we’re able to offer. Our students have well-rounded experiences that they’re able to obtain through Warsaw. Making sure ‘all means all’ for all students, that’s important not only to myself but the whole board.”

Johnson began serving on the board in January 2019 and joined the U.S. Navy upon his graduation from Warsaw Community High School in 1990. After being honorably discharged, Johnson permanently returned to Kosciusko County in 1996. He is employed by the Dilling Group, an operating company of Comfort Systems USA.

WCS’s District 5 seat, represented by Jeremy Mullins, is also on the ballot this year. School board seats for Districts Three, Four, and Six are not up for election this year.

The deadline for filing to run for a school board seat is noon Aug. 26.