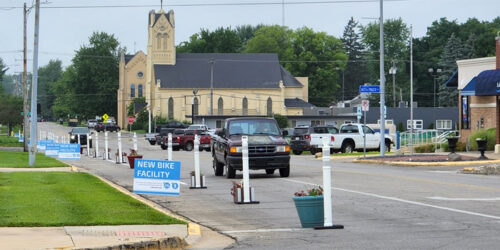 WARSAW — It didn’t take long for the first opinions to surface as Fred Helfrich set up signs and traffic sticks used to outline the trial run of the proposed dedicated bike lane on a two-block stretch of West Market Street in Warsaw.

Helfrich, a member of the Ride Walk Advisory Committee that represents Warsaw and Winona Lake, was one of a handful of people who installed the traffic sticks and flower baskets Wednesday morning, July 27, along the south side of Market street – an area that includes Midwest Band and HopLore Brewing Co.

Establishing the bike lane would eliminate five parking spaces along the two blocks.

Her immediate worry was that more parking spots would be eliminated if the route extended further east with the same design. The stretch from South Lake Street to Indiana Street includes 20 parking spaces along the south side.

Parking for merchants is always a concern, she said. On the other hand, she likes the idea of a dedicated bike lane.

“I think it’s good for the community. It’s just hard for downtown business owners with parking. I know it’s only five parking spots, but I have five employees,” Harman said.

The segment between the railroad tracks to the east and Columbia Street would link greenways to the east and to the west and would allow bicyclists to travel from Winona Lake to the Chinworth Bridge west of Warsaw.

The unfinished portion represents the “linchpin” to the overall goal, Helfrich said.

“This is the golden spike if you will,” Helfrich said.

City Councilwoman Cindy Dobbins, who lives and owns a business in the downtown, said she had heard a few comments soon after the path was outlined.

Dobbins was unaware of the temporary plan until she got an invite for a ribbon cutting celebrating the trial run next week.

She said she has concerns about parking.

Several people reached out to her with concerns, she said, adding she was “surprised” to learn about it.

She said she thought the trial run should have been brought before the traffic commission, of which she is a member.

But City Planner Justin Taylor said Wednesday afternoon that no decisions have been made and that the route will extend further east on Market through the downtown, but will not result in a loss of parking spots.

To make room for the bike lane, the center turn lane would be eliminated.

A preliminary design of a third phase would result in a net increase in parking spaces, he said.

“There will be no parking taken away,” Taylor said. “We do know that’s always a concern for residents in the downtown.”

The trial run, he said, is intended to spark some conversation and help introduce the idea.

“Nothing’s finalized. I want to emphasize that,” he said.

The city last talked about a potential phase three of Market Street, from the Railroad Tracks and through the downtown about three years ago. Phase one and two include all of East Market and includes an extra-wide sidewalk along the south side of the road.

Dobbins said the last time she heard, that officials were looking at using a short stretch of Jefferson as a loop around the immediate downtown area.

Taylor said that idea has been set aside because of some complicating factors with Jefferson and the belief that bicyclists would likely continue to navigate down Market Street and ignore the loop.

Taylor said there are no immediate plans to move forward with phase three, in part because of financial constraints. 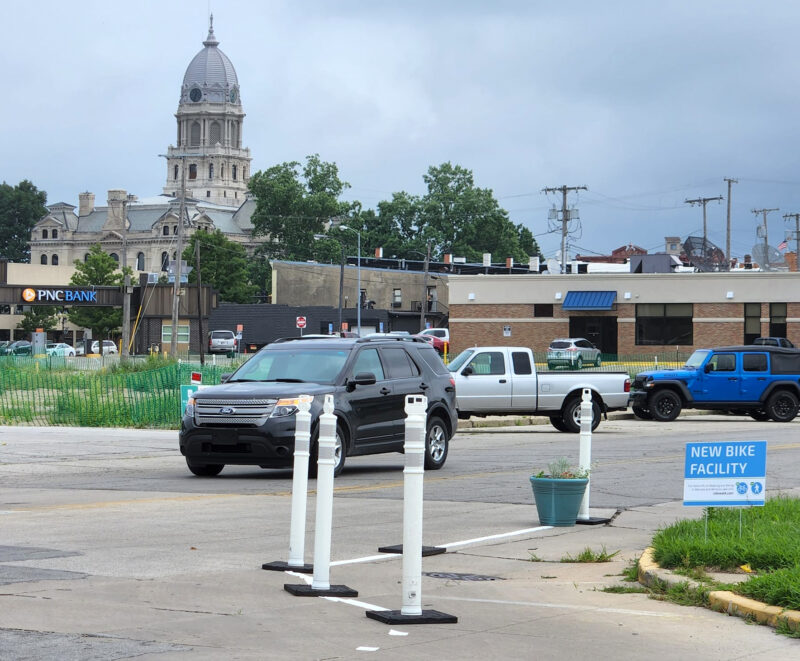