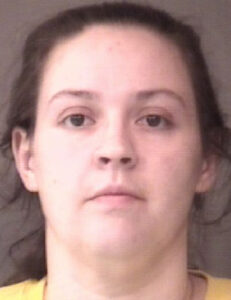 WARSAW — A Warsaw woman was recently arrested after allegedly choking a man with an extension cord.

On June 11, a Warsaw Police officer responded to a domestic altercation. Upon arrival at the scene, the officer was approached by a man who said he called 911.

According to court documents, the man said he and Roucloux went to a relative’s house. While there, the man called a female friend. When the man and Roucloux returned to their home, a fight ensued.

Roucloux allegedly slapped the man in the face, called him racial slurs, and told him to pack his belongings and leave. She continued to hit the man and at one point used a black extension cord to wrap it around the man’s neck and choke him. A child was present during the altercation.

The officer noticed the man had a scratch mark on the right side of his neck and redness on his face.

Roucloux told the officer that she and the man went to a relative’s house. While there, the man said he was going to call a male friend and stepped away. When they returned home, Roucloux learned the man had lied about calling a male friend and an argument began. The child at the home woke up when the man began yelling, leading Roucloux to take the child to a different room.

When Roucloux thought the man had left the residence, she went to use the bathroom. She told the officer that while she was using the bathroom, the man entered, grabbed her by the waist, and tried to lift her off of the toilet.

Roucloux said she wrapped her hands around the man’s neck to prevent him from moving her.

Later, Roucloux had to use the bathroom again but this time went with the child and a woman at the residence. She told the officer that the man was able to force his way into the bathroom and smashed a glass mirror on the back of a door. When asked if she used an extension cord to choke the man, Roucloux said she might have used a black extension cord outside of the bathroom, but was unsure.

Roucloux was booked in the Kosciusko County Jail on July 26, with a $6,000 surety and cash bond.