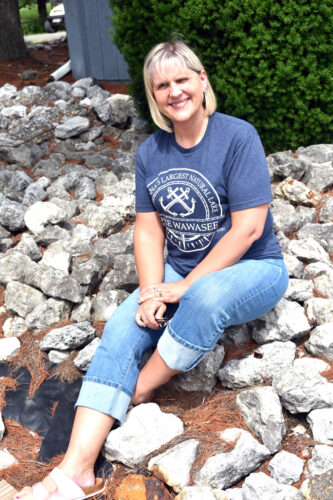 NORTH WEBSTER — It takes a person of uncommon inner strength and tenderheartedness to use nearly three decades of family trauma to fuel a passion to help others in similar situations.

Wende Roberts is that kind of person.

The North Webster native has served as caregiver to her dad, then her mom, both of whom suffered from dementia before they passed away.

When Roberts was in fifth grade, her father became the youngest person in the Midwest to be diagnosed with Parkinson’s disease. The degenerative malady necessitated Roberts and her mother caring for him for 22 years. He passed away May 16, 2010.

Her mom was diagnosed with Alzheimer’s disease in 2016, though Roberts could detect early symptoms a couple years before that. She provided essentially 24/7 care until her mom passed in January.

Her “own dementia journey as a caregiver” provided Roberts with considerable insight into the “hundreds of forms of dementia” that affect one in three seniors. “They are going to have it themselves, be caregivers or know someone who has it,” she said.

Her unwavering dedication to help others involved in dementia prompted her to become the sole licensee for services rendered by Alzheimer’s Home Therapy. Her exclusive license, which she obtained in May, covers seven counties: Kosciusko, Elkhart, Fulton, Marshall, Noble, Whitley and Huntington.

But Roberts, an only child, had one unresolved issue to address before fully launching her efforts. “I got into ‘go mode’ with mom and I never grieved Dad’s passing.” She recently completed counseling with GriefShare, a worldwide ministry that helps comfort and resolve trauma in those who lost loved ones.

“It is different not having either of them around, but I know where they are. I thank God for hope.”

Now she is ready to enlist caregivers to provide individualized treatment programs for the thousands of dementia patients in the seven-county service area.

“The program is holistic and nonpharmaceutical, and it can be done in a facility, nursing home, hospital, in the patient’s home or they can come to us,” said Roberts. “I am really excited to bring it to the area. There’s really nothing like this around here.

“We work toward keeping the individual out of a facility. This program can slow down progression of the disease and provide a better quality of life for dementia patients and their families and caregivers.

“I just felt the Lord literally laid it in my lap. He asked me to take hope into the program.”

Sessions can be conducted with groups or individuals and consists of three therapeutic components — physical activity, sensory therapy and brain games — that benefit patients’ cognitive, emotional and physical well-being.

“We’re looking for other like-minded independent contractors to work with us,” Roberts said. Prospective contractors will be required to undergo four to six hours of training. “We do nothing medical and provide no hygiene, and we use principles that are the same as teaching children, where we accommodate the learning styles of each client.”