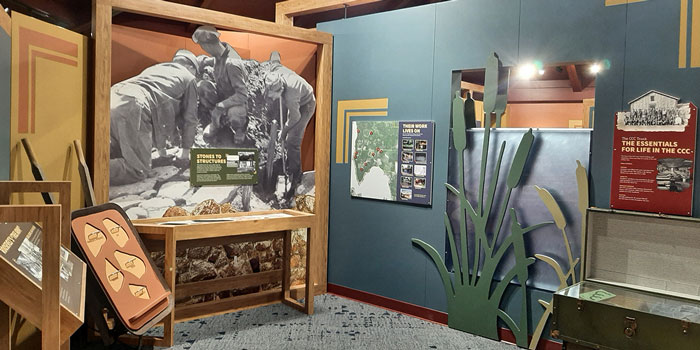 Pictured is one of the new exhibits at Pokagon State Park. The grand opening for the new hands-on exhibits will take place at 11 a.m. Thursday, July 21.

ANGOLA — The public is invited to a grand opening of new exhibits at the nature center at Pokagon State Park in Angola at 11 a.m. Thursday, July 21.

The new hands-on exhibits explore the history of the Civilian Conservation Corps on park grounds and the lifeways of the Miami and Potawatomi people, whose homelands were in this region. A new viewing window for wildlife watching has also been added.

“We look forward to sharing Pokagon’s wonderful new exhibits with everyone who visits,” said Ginger Murphy, deputy director for stewardship for the DNR Division of State Parks. “Our state park interpretive services, which include hands-on and entertaining programs, nature centers like this one, wayside signage and brochures provide our guests with tools for understanding and enjoying each park’s natural and cultural resources.”

Drinks and light refreshments will be provided after the dedication, courtesy of Potawatomi Inn. Hands-on interpretive activities will follow the ribbon cutting outside the nature center.

Four Seasons Construction and Strebig Construction worked with park staff to provide on-site facility renovations in preparation for the new exhibits. These renovations included new sidewalks, siding, doors and a gift shop, as well as outdoor storage for a mobility chair that can be used on the park’s trails.