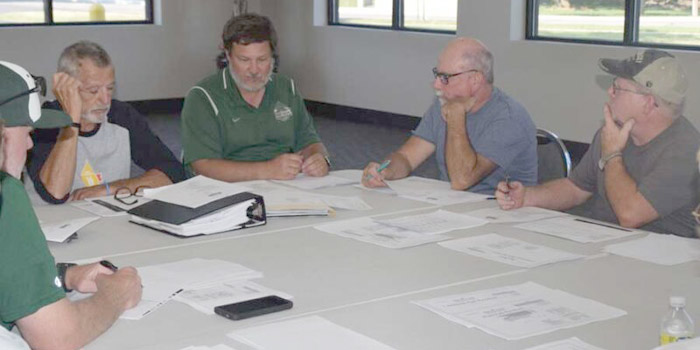 SYRACUSE — The Syracuse Park Board approved sending its recommended 2023 budget to the Syracuse Town Council during its meeting Monday night, July 11.

Chad Jonsson, park superintendent, noted he added funding to the gas and oil, REMC and NIPSCO and park improvement budget lines as well as a 5% salary increase. The budget reflects a 5.43% increase over last year which Paul Newcomer, park board president said was not bad considering inflation rates.

Jonsson reported the completion date for Schrock Fields continues to be late August. Work has been taking place inside the concession stand and outside. The hope is with some good fall weather and irrigation, the park will be ready for use next spring.

Park board members had an opportunity to review the latest drawings for pavilions in Laudeman and Ward Parks. Jonsson asked the board to review the drawings and forward any questions to him so he can have answers at the August meeting.

The pavilions will be similar to the pavilion in Lakeside Park and have automatic door locks on the restrooms. Board member Mary Hursh asked what the time line was. Jonsson explained once a design is approved, he’ll move forward seeking quotes.

The new signs should be ready to be installed in Veterans Memorial Park at Crosson Mill in the next few weeks. Jonsson told  board members he’d be seeking their input as to where to place the signs.

Jonsson along with board member David Johnston and park advisor Kip Schumm met with representatives from the Syracuse-Wawasee Chamber of Commerce and Bill Musser, Syracuse town Council president, regarding establishing a no leash dog park. Jonsson reported some other options have been suggested if the space at Dolan Drive is not available, however Dolan is still the preferred location as the other options are not as developed. Johnson noted the matter will come up for discussion at the town council’s August meeting.

The board approved holding a family camp out in Lakeside Park Sept. 9-10. Check in and tent set up will be at 5 p.m. Friday with tent take down at 10 a.m. Saturday. Cost will be $10 per family with pre-registration done before Sept. 7. There will be yard games, a hot dog cookout, s’mores, movie and popcorn and donuts and muffins.

Jonsson said he would let the neighbors know about the event. Johnston said he loved the idea. Board member Jeff Nicodemus agreed saying he thought the event was a good idea as well.

Participating families must supply their own tent. Pre-registration is required and space is limited. For more information call the Syracuse Parks and Recreation Department at (574) 457-3440.

Jonsson reported he is working on quotes for a multi-purpose vehicle. He also presented several quotes for a mower to be used at Schrock Fields. After some discussion, it was recommended board members take some time to consider their decision. The matter was tabled until the August meeting.

Darin Lursen, program coordinator, reported the Farmers Market consistently has 10 vendors. For the Fourth of July weekend, there were about 20 to 25 vendors and the park was packed. The Mudtastic went well with 230 participates.

This weekend is the Tour des Lakes and as of Monday night there were 350 people registered. Lursen said the event was on track to have 400 participants like last year.

Yoga has been going so well, another six week session began today, July 12.