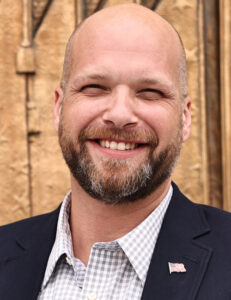 Henry was the Indiana Libertarian 2020 lieutenant governor candidate who ran alongside governor candidate Donald Rainwater. The pair earned 11.4% of the statewide vote, set records, and gained the campaign and national media attention.

Henry is a U.S. Army combat veteran who earned a Bronze Star for his journalism work in Afghanistan. Henry is known throughout the state for his advocacy and activism work for Indiana military veterans; alternative medical treatments; personally exposing government fraud, waste, and abuse; and fighting for individual and medical freedoms.

“I am eager to meet and speak with more citizens of our district as my campaign picks up momentum,” said Henry. “We are reaching voters in places our opponents cannot on the ground. We are drawing more people toward our party through principle and giving voters viable solutions and options.”

Henry is scheduled to attend the Middlebury Town Hall at 5:30 p.m. Wednesday, July 6, at Northridge High School. He will have a brief introduction but was not invited to participate in the panel or to give personal comment during the event.