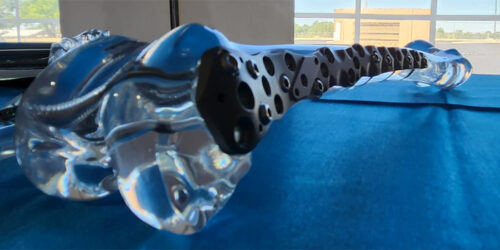 A type of brace for a femur bone was one of the items on display at the Zimmer Biomet appreciation lunch. InkFreeNews photo by Dan Spalding.

WARSAW — Zimmer Biomet tipped its hat to employees in Warsaw with a large-scale day-long celebration Thursday, June 30, at two of its campuses.

The granddad of orthopedics – and the largest employer in the city – held its first employee appreciation event in four years Thursday with events spanning three shifts at the company’s westside campus and its facility along US 30.

Inside a large white event tent on the west campus, classic rock boomed from speakers and workers from various nearby buildings converged for a full dinner from Nelson’s, a raffle, games and free t-shirts.

The celebration actually began at 1 a.m. Thursday with a lunch for third shift workers at both locations.

Along one side of the tent was a display of products and devices made locally by Zimmer Biomet.

Zimmer Biomet employs about 5,000 people locally. The company expected to feed about 3,500 workers at the events.

Thursday’s get-together felt like a celebration, said Jim Lancaster, the president of Global Reconstructive Business at Zimmer Biomet, who was helping serve lunch.

It’s not often that the company can bring together different departments, he said.

Zimmer began 95 years ago and merged with Biomet in 2015. The company is recognized as a world leader in the musculoskeletal health care industry. Over the years, it’s moved beyond a focus on hip and knee devices to include dental, spine and other joints. The company is also integrating the use of artificial intelligence and robotic surgery.

The company as well as local competitors DePuy Synthes and Biomet helped turn Warsaw into the orthopedic capital of the world, which at one point began producing about half of all the hip and knee manufacturing in the United States.

The acquisition of Biomet by Zimmer seven years ago now feels like a distant memory.

“We’re in a really good place right now,” said Lancaster who came over with Biomet. “I think everybody just sees ourselves as Zimmer Biomet. We really don’t talk about the legacy standpoint anymore. I think we’ve come through COVID as one team pretty well.”

He added, “A big piece of this is to give back to the team members who never got to go home and work from home and were on the shop floor keeping products moving.”

Among those invited to Thursday’s lunch was Warsaw Mayor Joe Thallemer.

He and Zimmer Biomet officials talk regularly and have good relations.

Thallemer said it’s difficult to calculate the impact Zimmer Biomet has had on the city – let alone the medical device industry.

Much of local orthopedic industry was spawned by Zimmer and DePuy, he said.

The industry, he said, offers good-paying high-tech jobs that any community would love to have.

In turn, the community is working hard to accommodate the industry’s needs including addressing the demand for more local housing.

“We’re doing our part to support an industry that would be cherished in any community,” he said. 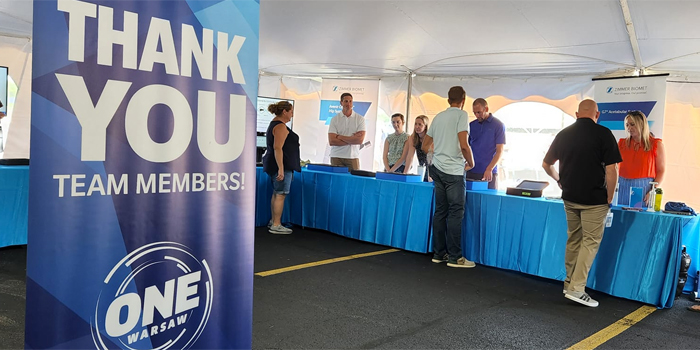 The company had numerous displays of Zimmer Biomet products for employees to view. InkFreeNews photo by Dan Spalding. 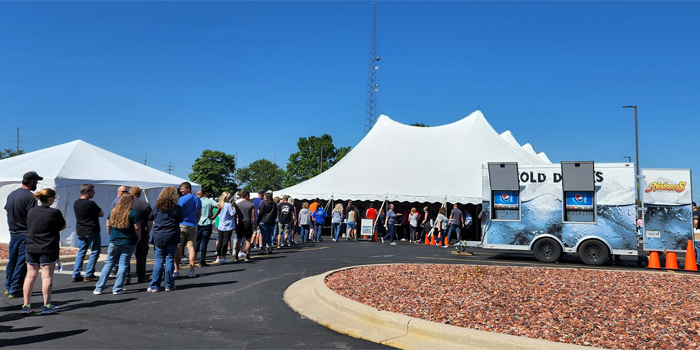 The company expected to feed about 3,500 employees Thursday at two sites. InkFreeNews photo by Dan Spalding. 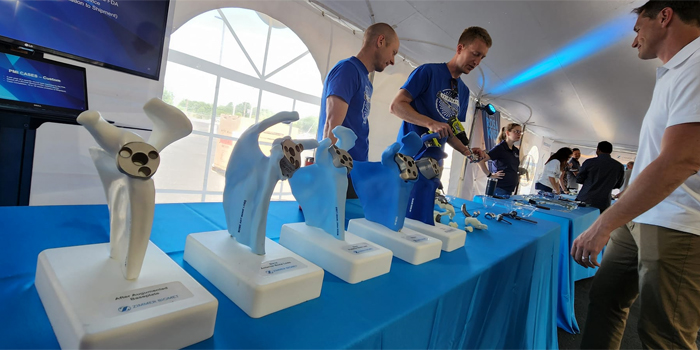 Employees were highlighting some of the Zimmer Biomet products made in Warsaw. InkFreeNews photo by Dan Spalding.