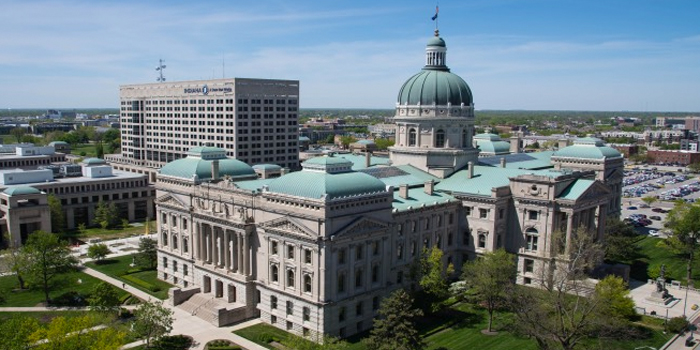 The Indiana State House in Indianapolis.

INDIANAPOLIS – More than 170 bills were signed into law by Gov. Eric Holcomb from this year’s legislative session and many go into effect today – Friday, July 1.

From novel topics like big cats and fossils to serious matters like gun regulations and the legal definition of rape, state legislators covered a lot of ground this year. Here is a look at some of the laws that will impact Johnson County residents.

Permits still will be available to those who want one, including people traveling to another state that has reciprocity with Indiana.

Two acts going into effect on Friday will cut the state income tax rate and the utility receipts tax, and there will be a new tax applied to vaping products.

Lawmakers passed a $1.1 billion tax cuts package, HEA 1002. The plan includes cutting the state income tax rate from 3.23% down to 2.9% over the next seven years. The rate will go down its first tier to 3.15% starting next year, and it will decrease each next year until it gets to 2.9% — as long as state revenues keep increasing.

The state’s utility receipts tax will also be no more as of Friday. The 1.4% tax on utilities appeared on Hoosiers’ utility bills, and utility providers are required by the law to pass that tax savings on to ratepayers.

A new state tax applied vaping products passed in 2021 also goes into effect today. The tax on pre-filled e-cigarette cartridges, or vape pods, will be 15% of the wholesale price, while a 15% retail tax will be implemented for refillable vaping products, according to the law.

Lawmakers passed the law during the 2021 session, with an effective date of 2022 in order to prepare retailers for new tax that will increase what customers pay for the products. During the 2022 session, lawmakers tweaked the tax with SEA 382. The original tax on pre-filled e-cigarettes was originally set at 25% of the wholesale price in the 2021 legislation, but it was reduced to 15% with SEA 382.

The law that prohibits transgender girls from participating in girls’ school sports, HEA 1041, is still expected to go into effect today despite it being challenged in court.

HEA 1041, authored by Rep. Michelle Davis (R-Whiteland) was originally vetoed by Gov. Holcomb in March. However, lawmakers voted to override the veto during a technical corrections session on May 13.

The same day, the American Civil Liberties Union of Indiana sued the Indianapolis Public Schools district on behalf of a 10-year-old transgender girl who will no longer be able to play softball on her school’s all-girls softball team. According to the complaint filed in the U.S. District Court for the Southern District of Indiana, the new law would deny the fourth-grader the right to rejoin her team because she is a transgender girl, which is a violation of Title IX and the U.S. Constitution, the Associated Press reported.

The ACLU also requested an injunction from allowing the law to go into effect, and Indiana Attorney General Todd Rokita filed a brief earlier this month opposing the injunction. No action has been taken as of Thursday afternoon to delay the law from going into effect.

The law also permits school boards to meet virtually when there is a declared emergency, either by the governor or by a local municipality that covers the school district’s boundaries. Schools conducted meetings virtually during much of 2020, as the COVID-19 pandemic caused schools to close in the spring. Even during such meetings, members of the public will be allowed to comment orally, the law says.

HEA 1116 will require all electronic voting machines in Indiana to have a voter-verifiable paper audit trail by the 2024 election. It also extends the requirement for each county to maintain an election security agreement with the Indiana Secretary of State, the law says.

The law also makes changes to the state’s absentee voting process by requiring anyone requesting an online absentee ballot application through the statewide voter portal to provide either their driver’s license number or the last four digits of their Social Security number, the law says.

Daily Journal reporter Andy Bell-Baltaci and The Associated Press contributed to this report.

This story was made available by Hoosier State Press Association.