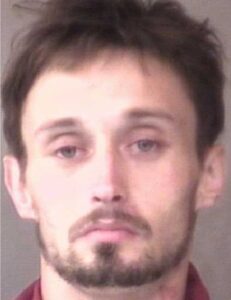 ETNA GREEN — A man was arrested after allegedly breaking into a woman’s home and stealing her vehicle.

Ryan L. Kreft, 27, 5 Pine St., Bristol, is charged with burglary, a level 4 felony; resisting law enforcement, theft, and fraud, all level 6 felonies; and theft and driving while suspended, both class A misdemeanors.

On June 6, a Kosciusko County Sheriff’s Office deputy responded to a report of auto theft in Etna Green. A woman said her black Honda Pilot was stolen from her residence.

According to court documents, a Warsaw Police officer was in the area of Jalynn and Detroit Street when he saw the stolen vehicle. While attempting to pull the vehicle over, its driver traveled through the Walmart parking lot at a high rate of speed, fleeing the officer.

The driver then traveled the wrong direction through the roundabout at CR 300N and Shelden Street, continuing on CR 300N at a high rate of speed. The driver disregarded stop signs, reached speeds over 100 mph, and traveled left of center while fleeing from the Warsaw officer.

The pursuit continued to the area of CR 1100W and CR 1350N, where the driver of the Honda Pilot attempted to hit a Marshall County Sheriff’s Office vehicle by traveling left of center. The driver eventually lost control of the vehicle and hit a metal wall.

The driver, later identified as Kreft, fled on foot into a wooded area. Officers found $385 in cash near where Kreft was found. Officers also found the woman’s purse inside the stolen vehicle.

The woman told officers that while she was sleeping, a person entered her home and stole her purse, a basket of keys and her vehicle. Her purse contained a large amount of cash as well as her credit cards.

The woman also said her credit card was used to purchase $87 worth of gas at a Warsaw gas station. Officers returned the cash and purse to the woman.

Kreft has a driver’s status of suspended prior. He was previously convicted of driving while suspended with a prior conviction in Elkhart County in April.

For this case, Kreft has already been arrested and released on his own recognizance. He has an initial hearing at 1 p.m. Thursday, June 30, in Kosciusko Superior Court Three.