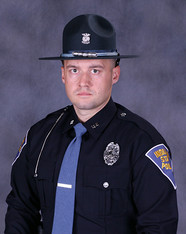 INDIANAPOLIS — Indiana State Police Trooper Derek Rine was recognized during an awards and recognition ceremony in Indianapolis on Friday, June 24.

The ceremony publicly recognized the achievements and deeds of self-sacrifice and accomplishments of ISP employees from around the state.

Rine was recognized with the ISP Peru District Driving Under the Influence (DUI) Award for his commitment to removing impaired drivers from Indiana roadways. In 2021, Rine led the Peru District with 25 impaired driving arrests. He has served ISP for three years and patrols primarily in Fulton County.