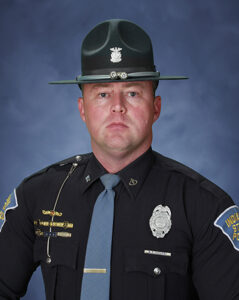 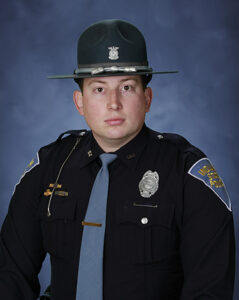 INDIANAPOLIS — The Indiana State Police held an awards and recognition ceremony in Indianapolis on Friday, June 24.

The ceremony publicly recognized the achievements and accomplishments that all too often go without the proper recognition. Officers were recognized for their dedication, service, bravery, and devotion to the department and the citizens of Indiana.

Senior Trooper Arthur Smith was honored with a Lifesaving Award for actions he took on the night of Dec. 26, 2021. Smith was investigating a minor crash that had occurred when an SUV drove into the back of an ISP car while it was stopped at the stop light at the intersection of SR 19 and CR 26. Smith had concluded the crash investigation and began to explain the associated paperwork when the 60-year-old driver grabbed his chest and fell to the ground unconscious.

Smith immediately rushed to his police car and grabbed his Automated External Defibrillator (AED) from his police car. When Smith attached the pads of the AED to the man, the AED advised that a shock was needed. After delivering the shock, Smith began chest compressions. After several compressions, the man regained consciousness and began to talk. Responding paramedics praised Smith’s quick actions before taking the man to a local hospital.

Senior Trooper Smith was also recognized as the 2021 Trooper of District for the Bremen Post. This award is given annually to a trooper at each district that personifies integrity, professionalism, and a well-rounded work ethic. Smith was selected by his command staff for his dedication, traffic and criminal enforcement, community involvement, and other services performed for the department beyond normal expectations. During 2021, Smith put great effort in keeping the roads safe with traffic enforcement. His efforts resulted in him making over 80 traffic stops on US 20 for vehicles traveling over 100 mph. During the year he made 125 criminal arrests and 19 arrests for drivers operating while intoxicated and investigated 21 crashes.

Smith is a 10-year veteran of ISP. He patrols primarily in Elkhart County.

Dockery has served with ISP for nearly 23 years. He primarily patrols Elkhart County.